When plunder becomes a way of life for a group of men in a society, over the course of time they create for themselves a legal system that authorizes it and a moral code that glorifies it.

In case you were still wondering, The Wall Street Journal has already explained it all:

The Dow industrials added as many as 500 points on speculation that economic growth will prove to be resilient as fiscal and monetary policies blunt the impact of the coronavirus outbreak on China’s economy.

That’s news-ticker fodder from two weeks ago. But, of course, the Dow Jones Industrial Average is up big again today on refreshed hope of a quick end to the story.

To quote our U.S.-China correspondent Chris Scott, “Don’t think this story is going away tomorrow.”

I read that as both observation and admonition.

That’s because China is going offline and off the rails at the same time, as Red Emperor Xi Jinping imposes marshal law and places upwards of 50 million citizens under house arrest.

Supply chains all over the world are buckling.

What started with Hyundai Motor Co. and its sister Kia Motors Corp. suspending auto assembly lines in South Korea was crystalized by Apple Inc.’s (AAPL) announcement that it would miss revenue guidance for its fiscal 2020 second quarter.

But there is no fear on Wall Street. The coronavirus will be gone by spring, at which time any hits to sales and earnings will be excused as one-time inconveniences and dismissed as ancient history.

Oh, but the giddy cheer in the casino is not rooted in a decent regard for capitalism’s inherent risks and volatilities.

It’s all down to worship of all-powerful economic agents of the state.

The fiscal and monetary authorities are presumed to always and everywhere have the back of financial speculators. They exist mainly to underwrite Wall Street’s entitlement to ever-rising asset prices, world without end.

These rallies to new highs are not about “resilience.”

They’re owing to blind faith that central banks will come to the rescue with still another tidal wave of dishonest money, that China will remain the world’s “growth engine,” that concentration of financial, economic, and political power is the way to foster and sustain permanent prosperity.

Remember, the Red Ponzi we allude to is a debt-entombed freak of history, now – more than ever, perhaps – rooted in the cult of an infallible and all-powerful Great Leader…

That’s exactly how the Red Ponzi is rolling these days as the coronavirus tightens its grip. State-controlled media have deified Xi as the veritable savior who will single-handedly deliver the nation from the pandemic’s clutches:

Indeed, it puts you in mind of exactly 54 years ago, when, after being cloistered for months plotting to regain control of the Middle Kingdom, Chairman Mao returned to duty by taking a record-breaking swim – allegedly 15 kilometers in a mere 65 minutes – at the Wuhan Bridge on the Yangtze River.

The message was that if the aging Chairman could conquer the mighty Yangtze, surely the nation could brave the economic and political storms then raging and overcome the adversities that had attended the failure of the Great Leap Forward and the tens of millions of famine deaths that stalked the land as a consequence.

Of course, even the Great Man is not always right. After Mao completed his legendary swim in Wuhan, he launched the even more catastrophic Cultural Revolution. But his swimming speed record holds to this very day…

Even in the more credulous times of 1966, the outside world laughed at Mao’s feat.

But not so much today, even in these more cynical times, regarding the current Chairman of the Communist Party of China.

The Great Helmsman and world-historic killer’s heir and assign, Xi Jinping, is feted by the assembled billionaires and grifters at Davos, heralded on Wall Street as the genius who can make the trains run on time and gross domestic product (GDP) grow quarter after quarter after quarter with uncanny predictability and regularity.

Look, not a single even quasi-capitalist economy in all of recorded history has ever posted results remotely like China’s in the modern era.

Yet purported capitalists on Wall Street and in Imperial Washington assume global growth can’t/won’t falter because – coronavirus or no – Chairman Xi will just keep swimming.

Then again, if you believe the following chart, you’re probably buying the dips along with your Florida swampland. At some point, credulity has no antidote… 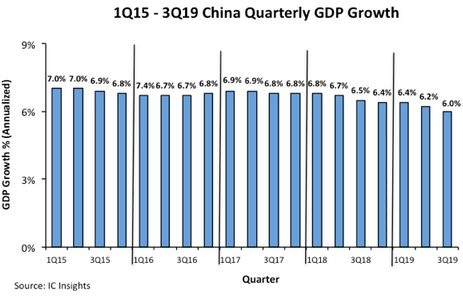 The statists who confected this simulacrum of a GDP chart are now busy flooding the world with propaganda and misdirection about China’s alleged herculean efforts to vanquish this virus.

Stunts like building a prefabricated prison/tomb-like “hospital” in 10 days in Wuhan are fronted as evidence of Xi’s absolute power to stop the pandemic cold and right the ship of state.

The reality is the new tsunami of credit and commands from Beijing will only accelerate the Red Ponzi’s eventual rendezvous with entropic decay and dissolution.

You simply can’t subject a people or their economy to this kind of unrelenting flow of centrally directed credit and command and expect a stable, sustainable, low-error outcome.

That’s the real reason why reasonably free markets are not optional and roughly honest monies are essential.

The fact that China is not the marvel of reliability and relentless growth that it’s cracked up to be has dire implications for the rest of the planet.

China consumes more than 58% of the world’s $360 billion semiconductor supply because it’s the computer-age assembly shop of the global economy. And, by the way, that figure was just 18% back in 2003, when the far less virulent SARS episode occurred.

So, if the Red Ponzi finally reaches its breakdown point, we’re not talking just about its 19% share of global GDP.

We’re talking about a horrendous potential disruption of the entire supply of gadgets and goods upon which the world vitally depends.

The Fed and other developed-world central banks have even less power to foster sustainable prosperity than even Chairman Xi.

These get totted up into GDP in Keynesian fashion, even if the embedded debt and malinvestment results in the eventual diminution of wealth, not its expansion.

But monetary central planners in the U.S., Japan, and Europe have been printing money so egregiously for so long that they no longer have any measurable impact on Main Street.

And that is why all this talk of “resilience” is simply ridiculous.

Be Your Own Investor

The combination of the coronavirus outbreak in China and the quadrennial return of presidential roulette in the U.S. has replaced the Trade War as the primary risk for investors.