Debts and lies are generally mixed together.

– François Rabelais, The Horrible and Terrifying Deeds and Words of the Very Renowned Pantagruel King of the Dipsodes, Son of the Great Giant Gargantua (c. 1564)

The Donald is on to something with respect to our sputtering economy – even if he is a little off about the causes and the solutions.

As it happens, July’s trade deficit of $73.1 billion was among the five worst in history. And there’s no confusion about which way the trend’s going…

It’s fair enough to say America doesn’t make or manufacture much anymore. But it’s well past time we acknowledge this is a big problem.

At least our Tweeter-in-Chief – erstwhile builder of high rises, hotels, and casinos – understands that much.

And that’s better than Wall Street economists, who get all giddy when imports soar because “consumers are spending up a storm.”

This ballyhooed binging is fueled by maxing-out credit and/or liquidating savings accounts.

It’s not based on production and income.

Here’s the Acela Corridor’s Keynesians: “Balance sheets are irrelevant. It’s all about the period-to-period money flows…”

Never mind any of that bollocks.

The everlasting truth is that neither household nor nation can borrow its way to prosperity.

But that’s exactly what America’s economic policy has amounted to since Nixon pulled the plug on the gold standard in August 1971.

And that’s exactly why the largest and richest economy in the world went from “modest creditor” to “$8 trillion debtor” in little more than 40 years. 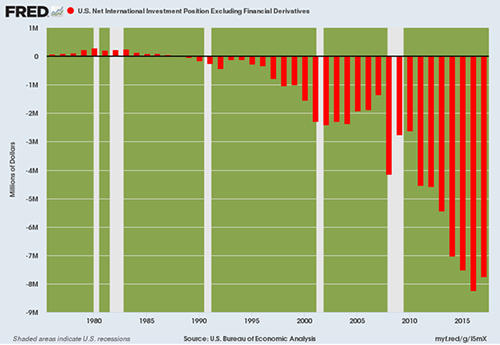 The “flow” that drives U.S. is nothing but a slow-motion leveraged buyout.

With only temporary exceptions during the 1930s, the debt-to-GDP ratio hovered around 1.5 times for most of the prior century.

That “golden mean” was set to the greatest economic growth of any nation in recorded history.

It sustained through peace and war. It held amid boom and bust.

But everything changed after 1971. The foundation of redeemable money abandoned, by fits and starts Keynesianism came to dominate the fiscal and the monetary branches of the state.

Balance-sheet discipline – for households, for governments – was supplanted by the imperatives of GDP flow.

By the fourth quarter of 2007 – the eve of the Global Financial Crisis – total debt had soared to $52.5 trillion. Gross domestic product was $14.7 trillion. 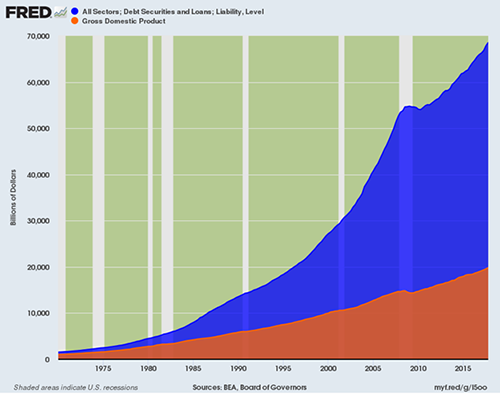 And that “golden mean”?

Well, the debt-to-GDP ratio was 3.57 times. So, the productive economy was bearing two extra turns of debt.

An extra turn or two means a lot when it comes to servicing debt. In fact, it’s the last turn or two that often brings the house down.

It’s what happens when paying interest on existing burdens supplants feeding growth as the primary objective of the organization, be it household, business, or government.

The balance sheet and cash flow are held hostage to imperatives set by banks and/or other lenders. And they demand adherence to restrictive covenants and maintenance of tight financial ratios.

We learned no lessons during or after the recent crisis. We know this because there’s been no systematic deleveraging of the U.S. economy.

Indeed, total debt reached $69 trillion at the end of 2017. But it grew in proportion to GDP, which was $19.8 trillion. Accordingly, the national leverage ratio has plateaued at 3.47 times.

Our slow grind toward economic stasis is happening.