Any fool can make a rule, and any fool will mind it.

The White House “strategy” is coming into focus…

BUILD A WALL & CRIME WILL FALL! This is the new theme, for two years until the Wall is finished (under construction now), of the Republican Party. Use it and pray!

No, it will only be a truly grotesque monument to Statism.

But it will rile up the natives and keep the base engaged.

There’s hardly a shred of evidence to support the all-caps claim the Tweeter-in-Chief makes here – other than the random, Foxified anecdotes he and his shock-troops upchuck all over social media these days.

But, of course, the message is that these kinds of cherry-picked horror stories can only be prevented if America never lets another immigrant into the country ever again.

It’s a completely fake crisis, if there ever was one.

There is no horde swarming the border. There is no outbreak of crime on the U.S. side of the line. And there is no national security threat whatsoever.

The 310,000 unauthorized immigrant apprehensions at the southwest border in 2017, in fact, represented a 78% plunge from the level in the year 2000.

And, when it comes to Mexican migrants, the decline has been nearly 90%. 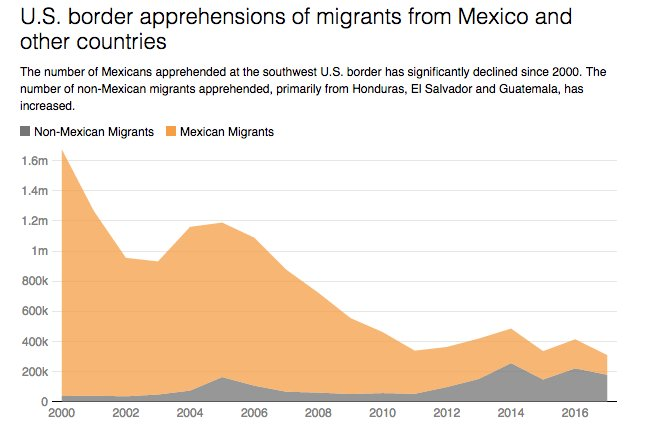 Likewise, there’s no evidence crime is spilling over the borders. To the contrary, on three leading measures in 2017, the counties that border Mexico have lower rates than for the rest of the U.S.

Indeed, on the crime-flowing-over-the-border file, the Tweeter-in-Chief is pulling a fast one.

He cites ICE arrest statistics, which suggest that 66% of these cases involve illegals previously convicted of crimes – in many cases, violent ones. But here’s the thing: Immigration and Customs Enforcement doesn’t patrol the borders…

For better or ill, ICE is in the deportation business. As a matter of operating procedure, it targets likely criminals for its raids and arrests throughout the interior of the country.

That is, there’s an inherently high criminal ratio in the ICE arrest statistics because that’s exactly what its mission entails.

Moreover, 3,600, or 58%, of these criminals were actually circular criminals. That is, they’d previously been convicted of illegal entry into the U.S. (a misdemeanor) or reentry (a felony). Another 1,000 had been convicted of driving under the influence of alcohol.

In fact, among last year’s 361,993 apprehended illegal border crossers, there were only three convictions for manslaughter. That implies a rate per 100,000 that’s 75% lower than for the general U.S. population.

And a total of 506 convictions for assault, battery, or domestic violence also indicate a rate far below the U.S. average.

Yes, there is a serious crime problem associated with the Mexican border.

But it’s one manufactured in the legislative chambers of Imperial Washington, not along a fenceless border.

That’s the War on Drugs, a bipartisan assault on freedom and personal liberty that also makes prohibited substances immensely and artificially valuable.

That’s what’s fueling the massive, violent underground distribution system that is the No. 1 source of violent crime in America.

To the contrary, the Great Financial Crisis was an intense but standard-issue bursting of a bubble. It’s the inherent result of monetary central planning and the systematic falsification of financial asset prices.

But it won’t be “all at once,” nor will it be a straight line down.

But we must prepare for a major re-pricing for all financial assets. And thousand-point intraday or day-to-day swings are part of that equation. Those can be frightening… for “buy and hold” investors.