The fiery trial through which we pass will light us down in honor or dishonor to the latest generation.… In giving freedom to the slave we assure freedom to the free – honorable alike in what we give and what we preserve. We shall nobly save or meanly lose the last best hope of earth. Other means may succeed; this could not fail. The way is plain, peaceful, generous, just – a way which if followed the world will forever applaud and God must forever bless.

Of course, I “LOL” to keep from crying…

Bubblevision – CNBC and Fox Business as well as MSNBC and Fox News – has plenty of “hot takes” on the Tweeter-in-Chief’s State of the Union address. I will have more to say, but only after I can place the president’s message in proper context.

For now, suffice to note that things look a lot different from inside the Acela Corridor than they do on Main Street.

Here’s what I mean…

If Imperial Washington had allowed Wall Street to suffer the bleeding cure it so desperately needed in September 2008, there would be no Everything Bubble.

There would have been an opportunity for politicians at both ends of Pennsylvania Avenue to discover that monetary central planning – like all other forms of top-down control – is bad policy and bad politics.

Our “betters” would have had an opportunity to reconsider the Federal Reserve’s massive seizure of power after Richard Nixon freed it from the gold standard in 1971.

Perhaps a shackled Fed would have considered abandoning its lunatic pursuit of 2% domestic inflation. Maybe they would have come to appreciate that “deflation” was good given the competitive realities of the global economy.

That might have encouraged Corporate America to get back to building strong, growing, and fiercely competitive business operations rather than engineering the way to everlasting wealth – for financiers, CEOs, and CFOs.

Of course, had all that happened, we wouldn’t be talking about President Donald J. Trump and his State of the Union address…

It is as simple as that.

But it was not to be…

Instead, the crippling economic impairment and bifurcation of the U.S. economy only intensified, dramatically, after Lehman Brothers’ implosion.

That’s because a post-crisis spree of money-pumping that resulted in the sweeping falsification of asset prices across the board.

The damage to the Main Street economy is apparent when we look at how all that “liquidity” was not utilized.

Total business capital expenditure (CAPEX) includes investment in plant and equipment as well as software and technology. Bubblevision’s boys and girls are always pointing to out “green shoots,” often expressed in annualized real growth rates of 5% to 10%.

They look to play up “real gross private investment in nonresidential fixed assets.” And this measure has increased by 6.4% over the trailing 12 months. And it’s now 61% above where it stood nine years ago, in September 2009.

Here’s why it’s bullshit: You can’t measure progress on highly cyclical components of the economy from the bottom.

To get a real sense of what’s going on at the “terrain” level – how people are actually living and working – you must consider what the “gross” term in this metric really means.

It represents current-year CAPEX to replace what’s consumed in current-year production plus any additional allowance for the growth of existing capacity.

If gross business investment is only equal to capital consumption, the annual gain in the first number can be as big as you please.

Here’s the rub: When gross investment spending is totally absorbed by replacement of worn out capital, the underlying economy is going nowhere. 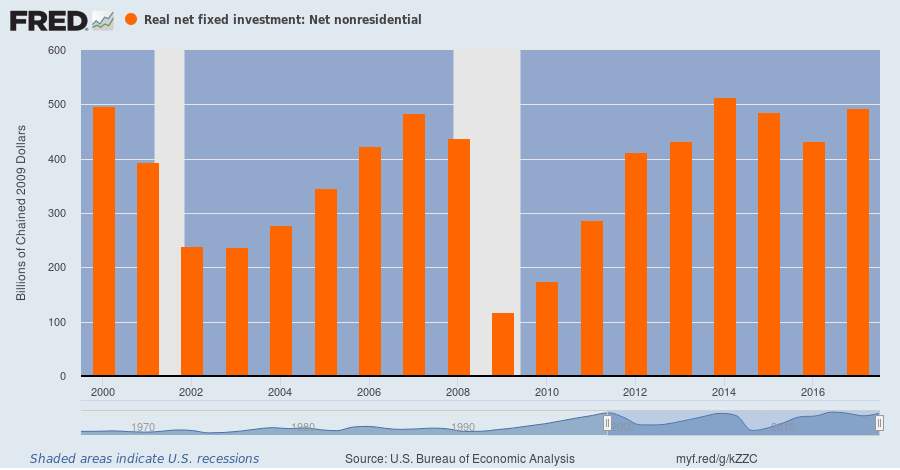 That’s exactly what’s happened since the pre-crisis peak in the fourth quarter of 2007: The underlying economy is going nowhere.

Back in late 2007, annual real gross business investment was about $2 trillion per year. Capital consumption was slightly under $1.6 trillion.

Over the ensuing 10 years, real gross investment grew by $555 billion. But the annual rate of capital consumption was right behind, rising by $547 billion.

What counts for growth and prosperity is net investment spending growth. 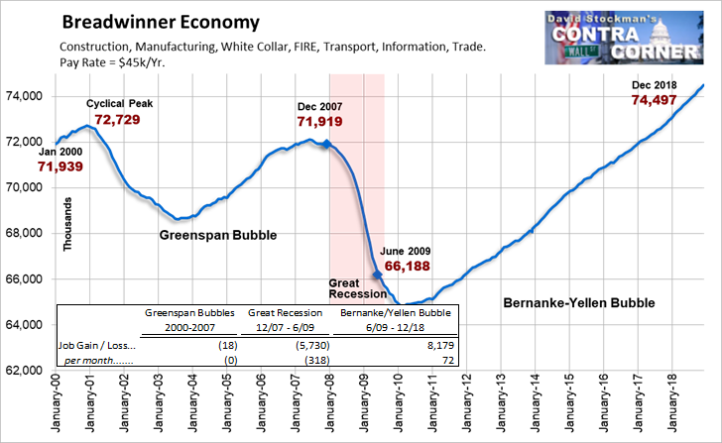 It was never true when Bubblevision’s talking heads told you it was “another good quarter for capital spending.” Those were talking points straight from Wall Street’s sales and trading desks.

Indeed, the growth rate for the nation’s capital stock has been dead in the water for nearly two decades.

And that’s why there’s been no gain in the U.S. economy’s 73 million “breadwinner” jobs in the 21st century.

Bubblevision should simply STFU about the SOTU.

Alexandria Ocasio-Cortez – or “AOC,” as a fawning Mainstream Media has anointed her – is the Member of the U.S. House of Representatives from New York’s 14th district.

Modern monetary theory – or “MMT” – is a theory from the left that rationalizes government debt and deficits.

AOC-and-MMT-style socialism just might be the new elixir of empire.