“Oh, ‘tanstaafl.’ Means ‘There ain’t no such thing as a free lunch.’ And isn’t,” I added, pointing to a FREE LUNCH sign across room, “or these drinks would cost half as much. Was reminding her that anything free costs twice as much in long run or turns out worthless.”

“Not philosophy, fact. One way or other, what you get, you pay for.”

“Whatever it takes” stimulus by the state’s fiscal and monetary authorities has many victims. That includes, or course, historical principles of sustainable capitalist finance and sound money.

But one of the most crucial is common sense itself.

Consider the repeated refrain in the Mainstream Media that trade statistics for 2018 denote a strong economy. Indeed, we’ve been told you can get ever richer by going broke.

Here are the knuckleheads from Politico, Imperial Washington’s house organ, in something they like to call “Morning Money”:

Trump embarrassed on trade – President Trump based his campaign on reversing the nation’s trade deficit, a dubious pledge given the deficit usually reflects a strong economy. But now he’s going to have defend the fact that the deficit with China hit a new record in 2018. The overall trade deficit of $621 billion was the highest since 2008.

The blithering ignorance is on full display in the phrase “given the deficit usually reflects a strong economy.” It’s also a weak swipe at the Donald.

The good news is we have evidence.

It happens that the U.S. has experienced continuous and rising trade deficits since the early 1970s. They now add up to more than $15 trillion. Presumably, that deficit explosion coincides with an increasingly “strong economy”…

That’s the conclusion after four decades of “bigger and better” trade deficits. The real annual growth rate for gross domestic product (GDP) on a rolling 10-year trend basis has fallen from postwar heyday rates of 3% to 4% to only 1.5%.

It’s not some crazy conspiracy theory… the Deep State DOES exist. And Trump can’t defeat it alone. That’s why the father of Reaganomics and the swamp’s worst nightmare is finally doing something.  Exposing their lies… Protecting our freedoms… and bringing us all together with the power of one voice. Get the details on how to join him, right here.

It’s so abysmal that we never got that low even during the 1930s. So, yeah, it’s worse than the Great Depression.

We’re not talking about short-term, point-to-point deltas you can cherry-pick just to prove a point. There are few things more robust than a 10-year rolling average stretched over the course of seven decades. 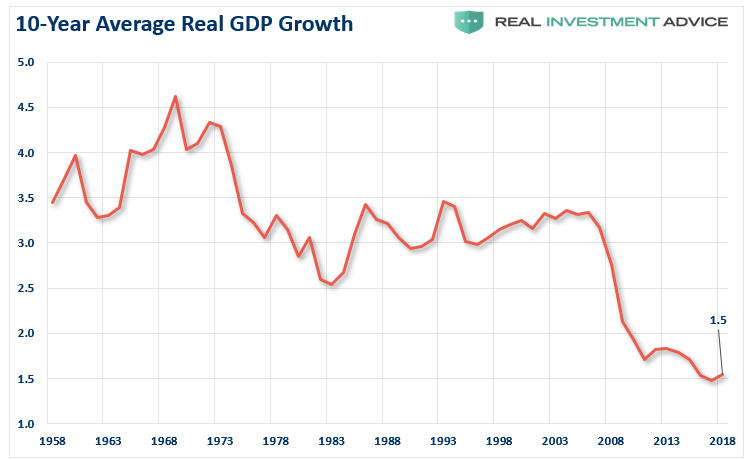 They’re ignoring the compelling evidence of the last 70 years.

If soaring trade deficits reflect a booming economy, how is the “boom” being financed?

The latter is exactly what’s happened since 1971. It’s a rolling national leveraged buyout with one unmistakable characteristic…

Our leverage ratio – that’s public and private debt divided by national income – has erupted by two full turns of debt. In plain language – and by today’s economic scale – that amounts to $40 trillion.

That, folks, is the only elephant in the room that should matter. Other than during the Great Depression, when national income collapsed, the approximate 1.5 times leverage ratio had prevailed since 1870. That’s through boom and bust, war and peace, good weather and bad…

That 3.47 times leverage ratio is the corollary to America’s soaring trade deficits. Cheap central bank credit and sustained interest-rate repression have enabled the U.S. economy to live way beyond its means for decades.

We’ve consumed more than we’ve produced, year-in and year-out, while borrowing the difference.

In a closed economy with no central bank printing press, that trick wouldn’t work. Interest rates would rise in the face of surging credit demand, offsetting the rising spending of some households, businesses, and/or government units with the increased savings of other such units…

That, again, is an honest market-based system.

Our monetary central planners, however, have validated the free lunch…

Merits of a Sound Model