Since man cannot live without miracles, he will provide himself with miracles of his own making. He will believe in witchcraft and sorcery, even though he may otherwise be a heretic, an atheist, and a rebel.

This recovery is exceedingly old. And it’s not accelerating. That means we’re heading hard upon our next rendezvous with recession.

Still, there’s lingering hope inside the Acela Corridor that some late-cycle economic happy pill will reverse the drift.

After all, not even this iteration of Wall Street would price S&P 500 earnings at 23 times if the groupthink said the next development would be an economic downturn.

Nor would Imperial Washington look on fiscal 2019’s $1.2 trillion/6% of gross domestic product (GDP) borrowing requirement with such equanimity if they understood the expansion is running out of time.

The question becomes, then, from whence this “economic happy pill”?

It certainly isn’t coming from the Red Ponzi, pinned as it is under a $40 trillion mountain of debt and monumental malinvestment. China’s nominal GDP growth rate slowed to 4.2% on an annualized basis during the first quarter. That’s down from 9.2% for the fourth quarter of 2018 and 10% a year ago.

Europe is flat-lining. The U.K. remains embroiled in Brexit. All that’s left for Bubbleheads to argue are “global tax cut benefits” owing to an impending collapse of oil prices.

Indeed, the most recently reported data leave little to the imagination about the global growth cycle: It’s rolling over, quickly. 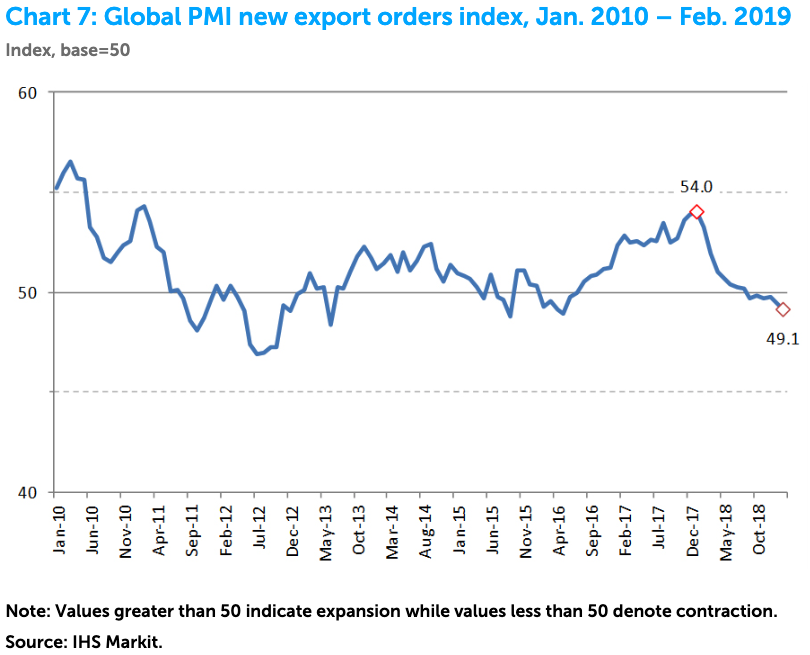 Any catalyst must come from the domestic front.

Oh, the Federal Reserve may have “paused” in cowardly “patience” its “normalization” campaign. But it remains to be seen whether the Tweeter-in-Chief has it in him to bully his man Jay Powell all the way into unleashing a jolt of stimulus.

And the fiscal machinery is paralyzed amid partisan warfare and rivers of red ink coursing thru Capitol Hill.

So, there are only two candidates: wage-growth acceleration and an investment boom.

Pay no attention to sell-side stock-peddlers cherry-picking monthly numbers to pair up a strong nominal wage change with a weak CPI reading. They’ve pronounced the commencement of the long-awaited acceleration of real wage gains multiple times throughout this long and weak cycle.

And, still, it hasn’t commenced. Apples-to-apples comparisons reveal that truth.

Let’s look at median real weekly wages of full-time workers, where we’ve actually seen a slight deceleration. During the last three years of the Obama administration, average real weekly wage growth was 1.3%. That’s dropped to an average of 0.9% during the first two years under the Donald’s watch.

Indeed, during 2018, real median weekly wages for full-time workers increased by just 0.65%. That’s the weakest growth since 2014. And it happened during what was supposed to be the peak of the Trump Boom…

Look, household pay barely staying ahead of inflation is hardly going to keep this expansion alive. It sure doesn’t MAGA. 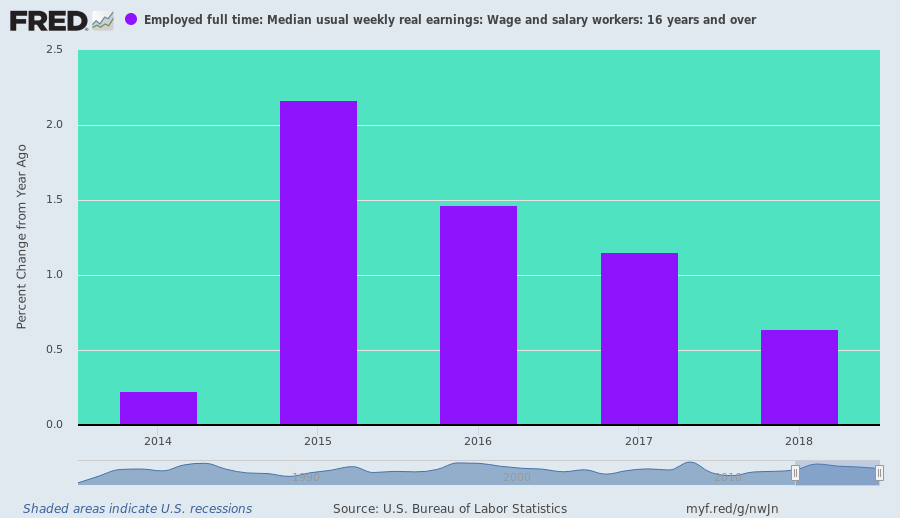 Meanwhile, the vaunted Trump business tax cuts have been in effect for more than a year… and there’s virtually zero evidence they’ve stimulated anything except a tsunami of stock buybacks and overpriced, pointless M&A deals.

In 2014 nominal GDP posted at $17.522 trillion. Fixed investment by business in plant, equipment, technology, and intellectual property came in at $2.394 trillion. So, the investment-to-national income ratio stood at 13.66%.

That was in the bad old days of Obama when the American economy was purportedly suffering from too much Big Government.

Then came the GOP victory in November 2016 – and the sweeping Christmas Eve tax reform bill of December 2017. The latter didn’t spare the loot when it comes to business taxes and incentives for investment.

During 2018 alone, business taxes were reduced by $230 billion, including $39.5 billion due to the new 20% business income deduction for pass-thru filers, $132.6 billion attributable to the 21% corporate rate, $16 billion for small business investment incentives, and $41.6 billion for bonus depreciation, a form of 100% first year write-off of capital expenditures (CAPEX).

You’d expect all that to pack an investment wallop. 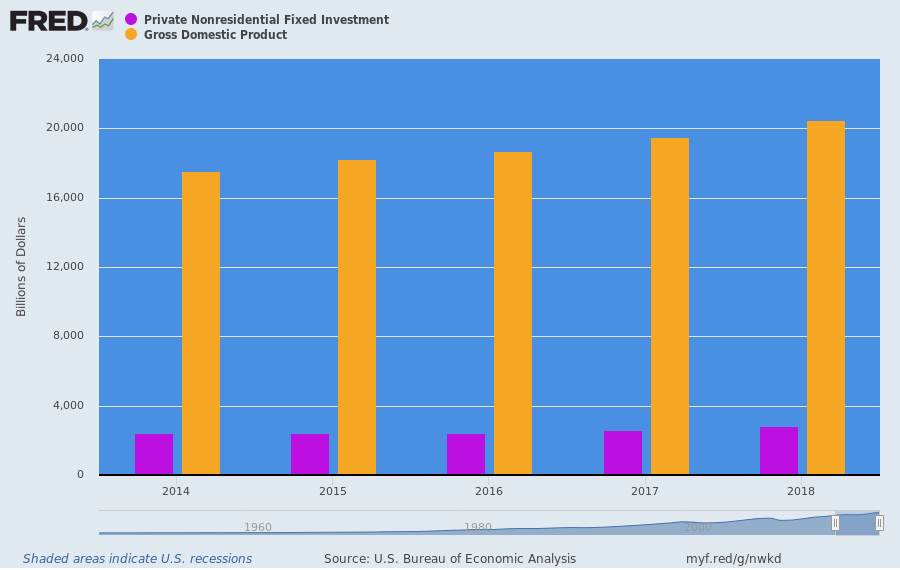 I’m not saying Obama’s policies were “better,” or even “good.” Investment is driven by many things other than tax rates. These include the state of the global economy. And the global economy experienced growth spurts driven by China’s credit impulses in both 2014 and 2018.

Still, all things equal, you’d expect some return on the $230 billion left in business coffers. Those ballyhooed tax cuts just did not move the needle.

That Christmas Eve tax bill the Donald signed in 2017 boosted business investment by 0.3% of gross domestic product (GDP). In round terms, that’s a $60 billion lift from a $230 billion incentive. The return amounts to 25 cents on the dollar.

Obviously, you can’t grow your way out of debt on that kind of fiscal stimulus yield.

Indeed, the Acela Corridor is waiting on a miracle.