Under pretence of governing they have divided their nations into two classes, wolves and sheep. I do not exaggerate. This is a true picture of Europe. Cherish, therefore, the spirit of our people, and keep alive their attention. Do not be too severe upon their errors but reclaim them by enlightening them. If once they become inattentive to the public affairs, you and I, and congress, and assemblies, judges and governors, shall all become wolves. It seems to be the law of our general nature, in spite of individual exceptions; and experience declares that man is the only animal which devours his own kind, for I can apply no milder term to the governments of Europe, and to the general prey of the rich on the poor.

Alan Greenspan led the Federal Reserve down the rabbit hole of total surveillance of all the components of gross domestic product (GDP). He redefined the central bank’s mission, from tight focus on “Money” to plenary concern with “Economy.”

Today, Imperial Washington defines “Economy” purely in terms of Wall Street and the 1%. We’re talking about a stock-index-based simulacrum of prosperity that rests on a foundation of easy money. 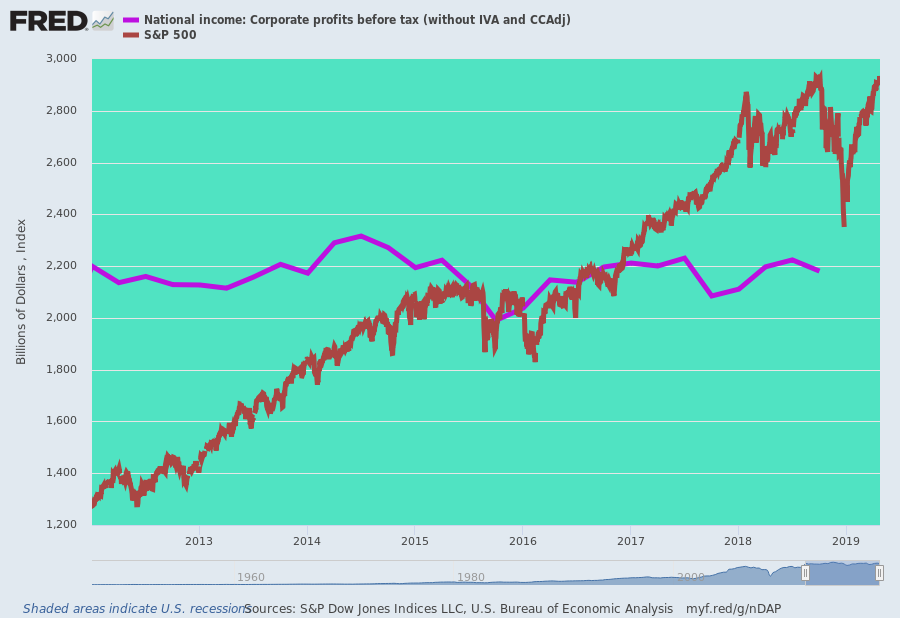 The Fed’s balance sheet grew from $200 billion in August 1987 to $4.5 trillion at the peak of “quantitative easing” in October 2014. That’s growth of 22.5 times – and it contrasts dramatically with the 3.8 times rise in nominal GDP during the same 27-year period.

Real GDP grew at an average annual rate of 3.5%. And the real standard of living of U.S. families rose dramatically. 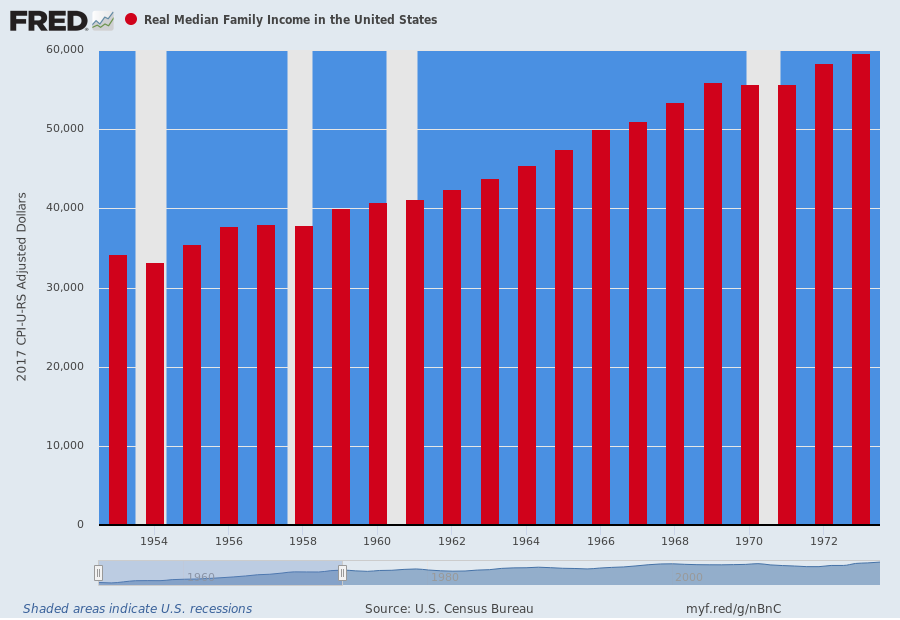 The Fed’s balance sheet grew more slowly than national income over these two decades. And prosperity was no worse for the wear.

That’s why they called it the American Dream.

And real family income has been dead in the water, creeping up at an average annual rate of 0.17%.

The truth is the actual living standard of the median American family – when the actual cost of living is properly accounted – has been shrinking for the entire 21st century. 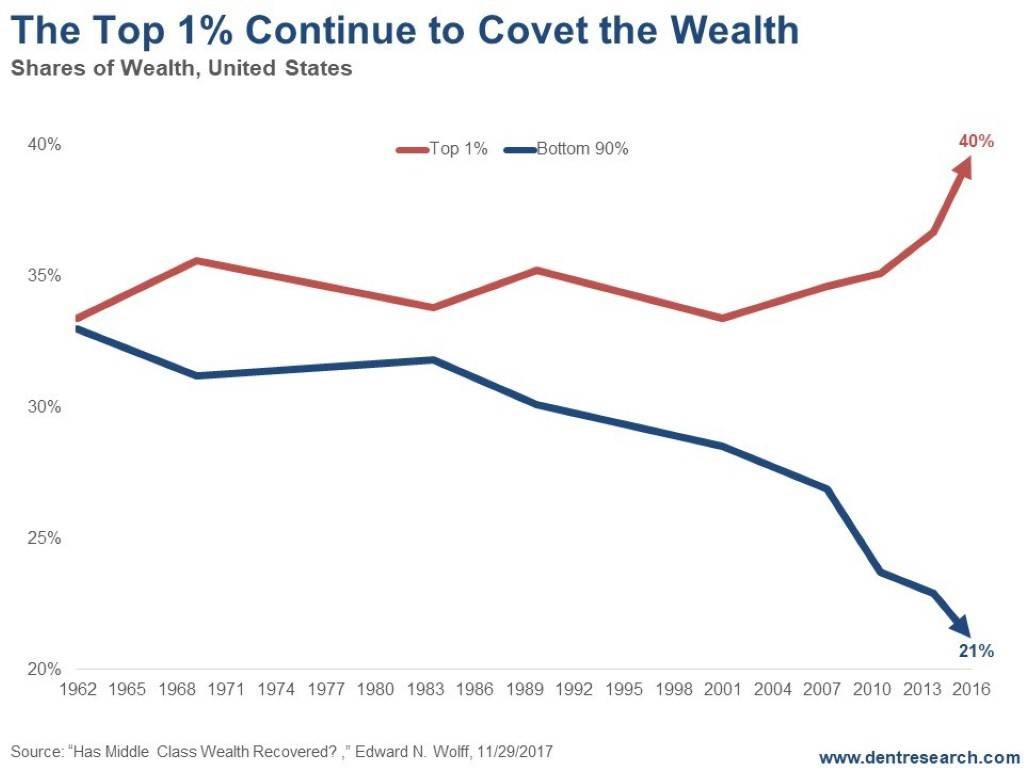 When monetary central planners became focused on “Economy” rather than “Money,” the U.S. economy rapidly transformed. It’s been “financialized.” And it’s weighed down by debt.

Even as the Fed pumps up incremental demand, benefits flow to accounts of foreign suppliers. What was simple leakage has become a flood over the last couple decades. 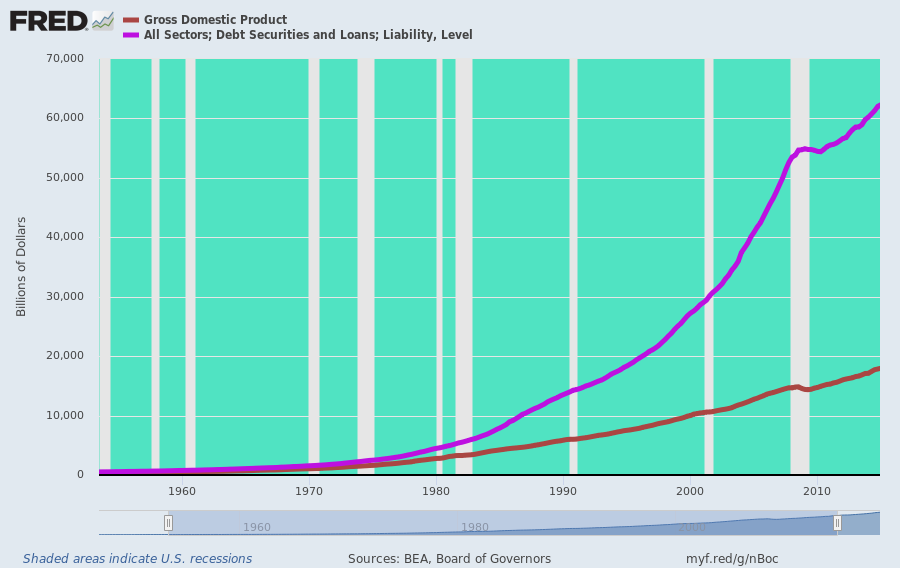 Domestic consumption of durable goods increased by 61%. But domestic production of durables rose by only 32%. The difference, of course, went into the coffers of foreign producers.

The Fed’s defenders say it doesn’t matter. They say it’s just a partial view of international flows. They say everything comes out in the wash. They say foreigners offset the gargantuan U.S. trade deficit with inflows to the U.S. economy in the form of loans and investments.

What they won’t say is, over long enough horizon, it amounts to going hopelessly into hock.

“Wealth effects” groupthink has the Fed claiming to macro-manage and micro-tune U.S. GDP by the year, by the quarter, and, sometimes, even by the month. Even if it could generate honest incremental demand, a lot of it would flow right out of the bathtub through the mechanism of America’s massive global trade deficit.

When it comes to the Fed’s 2% inflation target, the leakage is all the more massive. That’s especially so since the Fed can no longer hit any of its targets.

Yet it continues to find ways to inflate bubbles for Wall Street.

When This Bubble Bursts…