Above all, don’t lie to yourself. The man who lies to himself and listens to his own lie comes to a point that he cannot distinguish the truth within him, or around him, and so loses all respect for himself and for others. And having no respect he ceases to love.

Larry Kudlow recently suggested there’d be no more interest-rate increases by the Federal Reserve during his lifetime.

Based on actuarial tables, the 71-year old Director of the National Economic Council should last another 14 years. In other words, the president’s top advisor on the economy is OK with zero-cost money through 2033.

My old colleague from the Reagan Revolution… shrieking, alone in the wilderness, for more of the same easy money that already brought us two progressively worse Wall Street meltdowns and Main Street recessions so far this century…

But Larry’s not a madman shrieking alone in the wilderness. Indeed, he’s got a lot of “respectable” company.

That includes, of course, Goldman Sachs (NYSE: GS), though the vampire squid was a little soberer. It forecast no Fed rate hikes through the end of 2020.

And Charles Evans, the president of the Chicago Fed, provided the “money” quotes in reports from Bloomberg, Reuters, and the Wall Street Journal about a rate cut later this year.

Even the interest-rate trading market is pricing in a nearly 72% chance of a rate cut by the end of January 2020.

Money-market funds have been negative in real terms since April 2008. All these folks are doing is endorsing the mere extension of deep subsidies to Wall Street…

Global stocks have added $10 trillion in market capitalization so far this year, and our monetary central planners are here to keep it going, whether the “wealth effects” actually trickle down to Main Street or not…

Goldman, of course, profits handsomely on the “carry trade,” so it totally favors the cheapest possible overnight funding costs. To maintain “respectability” – and for marketing purposes, too – it must provide a cover story for pressuring the central bank to keep subsidizing its business.

The analysis usually boils down to “inflation.” That’s also Evans’s issue. His comments about the 1.8% reading on the most recent “personal consumption expenditure deflator” – the Fed’s favorite gauge – prompted the media boomlette…

But, as the great Paul Volcker keeps pointing out, the “no inflation” argument is patently false.

At the Fed’s sacred 2% target, a dollar saved by a worker when he’s 20 will be worth just 38 cents when he retires at 68. And even that excludes things like the costs of higher education and health care.

This computation raises the question of authority and fairness, as in, “What empowers the central bank to massively expropriate the wealth of savers over the decades?”

Nobody inside the Acela Corridor answers – or even asks – that question. It’s not hard to understand why. In Imperial Washington, they spend and borrow. On Wall Street, they speculate and scalp. At neither end do time horizons extend more than the next election or the next quarter.

The longer-run destruction of Main Street isn’t even recognized. 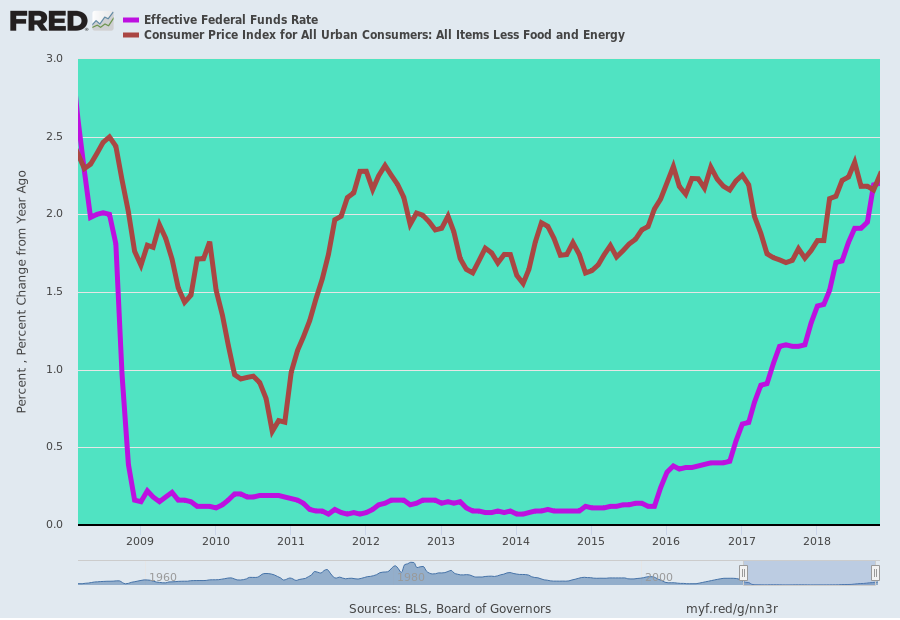 This obliviousness to the time dimension of economics is only part of a steep descent into obscurantism breathtaking in its completeness.

This is the “the propagation of destructive signals to politicians, businesses, and households to borrow and speculate rather than save and invest” I noted on Wednesday. Not only is America detached from all discernible principles of sound money. We’re adrift of common sense itself.

It’s ironic that fallout from the most recent Fed-blown crisis drove many voters to the polls to cast a ballot against the Acela Corridor. So, Donald J. Trump’s election in November 2016 was a consequence of Bubble Finance.

Even more ironic than that is that Bubble Finance just might get the Donald reelected in November 2020.

And, most ironic of all, the Orange Swan might be the end of Bubble Finance.

Indeed, I suggest we’ve got another thing coming, well before 2033, and that’s a thunderous financial collapse with profound economic, social, and political implications.