The common people pray for rain, healthy children, and a summer that never ends,” Ser Jorah told her. “It is no matter to them if the high lords play their game of thrones, so long as they are left in peace.” He gave a shrug. “They never are.”

It’s not entirely lost on the Donald that his Trade War is creating collateral damage. Indeed, the very voters of Flyover America who put him in the Oval Office are bearing serious tariff scars.

That’s why the Department of Agriculture found $12 billion to mitigate the impact of lower prices and lost sales on farmers due to new tariffs.

And, this week, the man who “wrote” The Art of the Deal is bearing fresh Trade War aid for rotting farmers in Flyover America:

We’re going to take the highest year, the biggest purchase that China has ever made with our farmers, which is about $15 billion, and do something reciprocal to our farmers so our farmers can do well.

As was the case last year, the federal government will borrow the money it needs to cover this new obligation.

The largest foreign holder of U.S. debt is China, with $1.13 trillion.

Think about that for a second… we’ll be borrowing from China to cover losses our farmers incur because they can’t sell their crops to China.

But is it as absurd as the fact that that $27 billion is basically just another rounding error when it comes to Acela Corridor finance?

There’s still more irony in the fact that debt is what’s crushing Main Street. That’s even after the “wake-up call” that should have been the Global Financial Crisis/Great Recession.

Between Alan Greenspan’s arrival at the Federal Reserve in August 1987 and the pre-GFC peak in October 2007, Main Street buried itself in cut-rate debt. Total household debt outstanding rose from $2.8 trillion to $14.2 trillion, or by 5.1 times.

That’s nearly double the 2.7 times gain in wage and salary income during the same 20-year period. 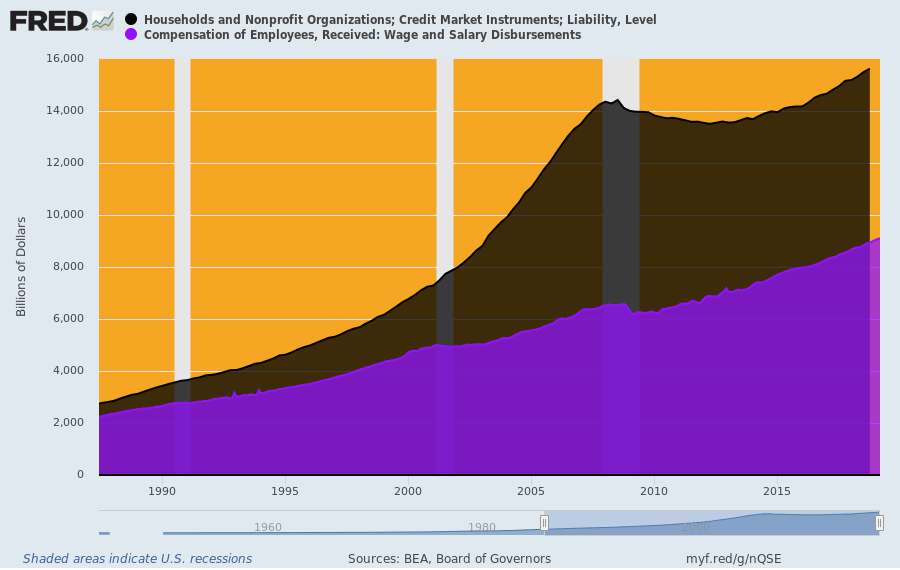 You’d tend to think of 2007 as “Peak Debt” for the household sector, given what happened over the ensuing two years.

But, in the 12 years of “recovery” after the Great Recession, we’ve hardly deleveraged…

That’s $3.75 of new debt for each dollar of added nominal GDP over the last 12 years.

We’ve borrowed our way to “the greatest ECONOMY,” as the Tweeter-in-Chief recently described it.

Structural weaknesses in the U.S. economy abound. And there’s a formidable potential catalyst in the form of the Orange Swan in the White House.

The Donald is not executing a super-strategic three-dimensional chess maneuver to extract concessions from Beijing. It’s all blithering ignorance and unhinged megalomania with him – especially as it relates to the economics of trade.

International commerce is not a zero-sum game – trade balances are not a matter of “winning” or “losing.”

But it’s been evident from the beginning that he’s going to use his vast authority to pursue a policy of statist mercantilism that doesn’t remotely address the underlying cause of our massive deficits.

Fast-forward to 2018. Exports were $120 billion, while imports were $662 billion. That’s a deficit of $442 billion. And it had nothing to do with bad trade deals, or even Chinese cheating.

It’s a product of the Fed’s easy money. And the Donald demands they double down.

He has no idea what he’s talking about.

How to Keep an Edge