The famous Lucius Cassius, whom the Roman people used to regard as a very honest and wise judge, was in the habit of asking, time and again, to whose benefit it be?

For all his bile, bombast, braggadocio, and bullshit, the Donald is proving to be the Acela Corridor’s Boy.

This Trade War brouhaha is not about freer trade. It’s not even about trade policy at all.

It’s about K Street-driven corporate welfare and industrial statism… with some big licks for the Warfare State thrown in to boot. “Drain the Swamp?” Hogwash…

The Tweeter-in-Chief doesn’t get it. He thinks he’s attacking the bilateral trade imbalance, the one where China shipped $563 billion of goods to America in 2018 but purchased only $120 billion of stuff from the U.S.

The $443 billion gap is ridiculous. It would never happen under a regime of free markets and sound money.

But the cause of this freakish outcome is not addressed anywhere by anyone… Indeed, the “Low Interest Man” in the White House is begging for more of it…

The cause of America’s trade deficit with China are the Federal Reserve’s pro-inflation policies and easy-money predilections. They’ve created artificially cheap debt and chronic financial-asset inflation. 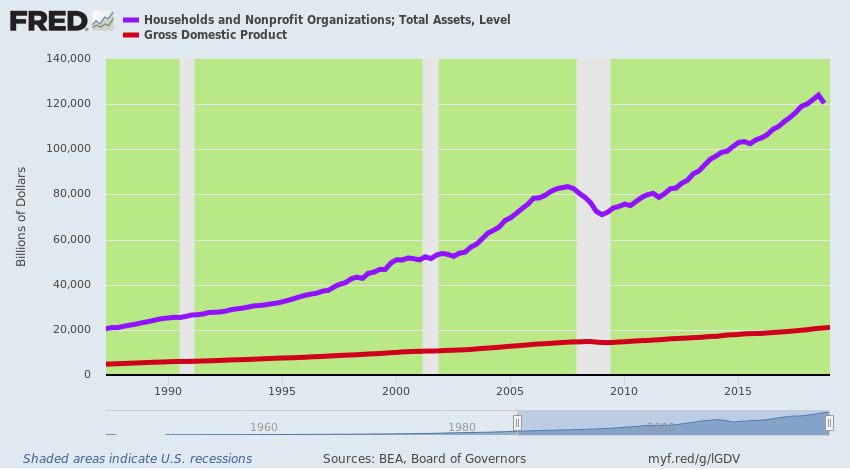 Household assets – represented by the purple line – have increased by the staggering sum of $102 trillion since October 1987.

By contrast, nominal GDP is up by only $15.5 trillion during the same 31-year period. In other words, asset values have grown 6.5 times faster than economic production.

The “financialization” of the U.S. economy also incentivizes CEOs and CFOs to strip-mine their balance sheets and sacrifice their cash flows to fund growth-retarding buybacks, dividends, and M&A.

That all gooses short-term stock prices and executives’ options packages. And it diminishes long-term value-creation via competitive growth.

Is this free-market capitalism at work? Is it sustainable? Is it even rational?

There is a single, fulcrum error behind the gutting of Main Street.

It’s based on a Keynesian predicate that arose during your grandfather’s era of relatively closed national economies and union-dominated industrial wage-and-price structures.

Statist economists argued that a low, consistent rate of inflation is a growth-and-prosperity tonic. It was a marginally plausible but incorrect idea.

This historical delusion is rooted in what’s called the “sticky wage” hypothesis.

Back then (union) wages were inflexible (to the downside). In other words, any loss of demand during a business-cycle downturn would result not in adjustments to market-clearing wage levels. What would result is a self-fueling reduction in output, incomes, and spending.

That meant nominal spending – plus a modest annual inflation component – had to be maintained at all hazards. That’s how you made room for real wages – i.e., adjusted for inflation – to shrink in response to changing conditions.

Of course, this always dubious “sticky wages” hypothesis was rendered null and void years ago by globalization.

Just about zero… But that reality hasn’t put our monetary central planners out of business at all.

Instead, they just invented a new deadly theory to perpetuate the inflation-as-growth-tonic proposition: “Deflation” is what we fight today…

“Deflation” is the spiral into which economies… societies… even civilizations descend only at their terminal peril.

Of course, this figurative black hole is no more real than the nine rings of Dante’s hot place…

But fighting it is good for Wall Street. And it’s good for Imperial Washington.