What was the use of my having come from Oakland it was not natural to have come from there yes write about if I like or anything if I like but not there, there is no there there.

They’re trying so hard to rally today on Wall Street.

All the major indexes are in the green or teetering on the verge thereof… there doesn’t seem to be too much conviction… but they want so badly o be buying another f***ing dip.

Another way of saying it is they want to pay top-tick multiples of 22 times trailing-12-month earnings for the S&P 500 Index. It’s as if there’s no end in sight – nor will there ever be – for Peak Trump…

Indeed, by the time you read this, it might already be the longest stretch of uninterrupted growth in American history.

Another way of looking at it is the calendar itself has become a huge risk factor – particularly if we account for the fact that this is also the weakest recovery in American history.

Sure, we’ve seen “growth.” But it hasn’t been benign. These 119 months of expansion June 2009 have been accompanied by the most dangerous eruption of debt, speculation, rent-seeking, and upward reallocation of wealth ever imagined.

Wall Street and Corporate America are rolling in it. Main Street’s getting rolled by it.

And Imperial Washington ignores a body economic riddled with imbalances, excess, and malinvestment. It’s unsustainable, but it continues to accumulate – all of it – growing ever-more threatening as they metastasize…

The U.S. economy has gained less than half of the real gross domestic product growth posted during the two previous long expansion cycles of the postwar period.

The implicit argument that this expansion will last twice as long because it’s been half as strong is paint-by-numbers idiocy. There are deep structural reasons why it’s been so weak.

This expansion isn’t destined to be some sort of economic Methuselah – its cyclical old age will never approach the biblical equivalent 969 years… Keynes’ true acolytes can wish all they want; this one will die too, and soon. 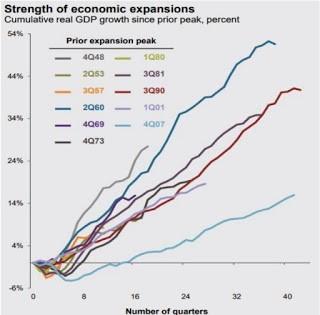 And, yet, the Donald keeps boasting about “having created perhaps the greatest Economy in our Country’s history.”

Strangely, monetary central planners and their Wall Street cult-followers have even taken to claiming that growth cycles end mainly due to monetary policy mistakes… And this is true.

Ah, but the science of monetary policy is now so advanced – so perfected – that no catalyst for recession survives long enough on the horizon to cause any fuss… And this is preposterous.

The truth is that egregious monetary policy mistakes have already been made.

That’s because the cause of a particular bubble’s burst does not lie in the belated and futile efforts of central bankers to tighten at the very end of a cycle.

It lies in the years of asset-price falsification. It lies in massive, artificial credit and liquidity injections that encourage unsustainable leverage and speculation.

Indeed, the same time distance, 118 months, in the orange bar in the chart below represents a far more dangerous and unstable old age than the equally long 1961-to-1969 cycle, which lasted 105 months, and the all-time record 1991-to-2001 cycle, which lasted 119 months. 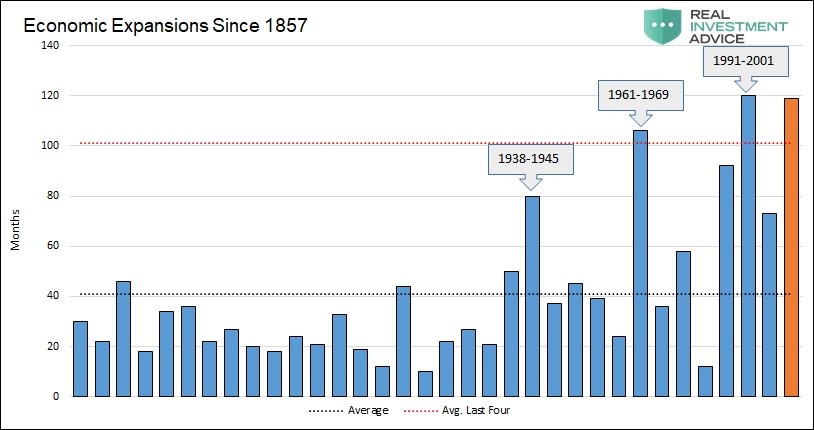 The Federal Reserve’s massive balance-sheet expansion over the last 10 years has exerted a malign influence on financial markets. For going on yet another decade, they’ve functioned only as devil’s workshops. They’ve blown into being every manner of speculative excess known to both carbon- and silicon-based traders.

And the trillions borrowed by Corporate America to buy back their own stock is only the most obvious manifestation.

When it comes to unsustainable excess, the starting point and the catalyst has been the leap off the deep-end by the monetary and fiscal authorities.

Now it’s time to get ready for the next crisis of their own making.