Within certain limits, it is actually true that the less money you have, the less you worry.

Sven Henrich had the day nailed at 6:33 a.m. ET, a good three hours before the open on Wall Street: “Trade deal optimism is back”…

Of course, Chair Jerome Powell served up his own assurance that the Federal Reserve is ready to act if the Donald’s tariffs hit the economy.

All the major indexes are up more than 1.5%.

It’s another frothy day in June, and I’m reminded of where we were almost exactly 19 years ago…

As far as I can tell, Alan Greenspan was right exactly one time after he took the helm of the Federal Reserve in August 1987.

It was a June 28, 2000, meeting of the Federal Open Market Committee (FOMC) in the inner sanctum of the Eccles Building. His word-for-word remarks were transcribed – but only for posterity’s sake. They wouldn’t be released for 10 years.

The idea behind this lag was that our monetary central planners didn’t want to disturb us with what they’re really thinking – at that moment of great significance or any other time.

Said the Maestro among his minions:

The problem is that we cannot extract from out statistical database what is true money conceptually, either in the transactions mode or the store-of-value mode. One of the reasons, obviously, is that the proliferation of products has been so extraordinary that the true underlying mix of money in our money and near-money data is continuously changing. As a consequence, while of necessity it must be the case at the end of the day that inflation has to be a monetary phenomenon, a decision to base policy on measures of money presupposes that we can locate money. And that has become an increasingly dubious proposition.

Put simply, Greenspan admitted that – under the “rules” of modern banking and finance – it’s damn near impossible to measure “money,” let alone track it by the week or the month.

They had no idea what was happening on the ground. 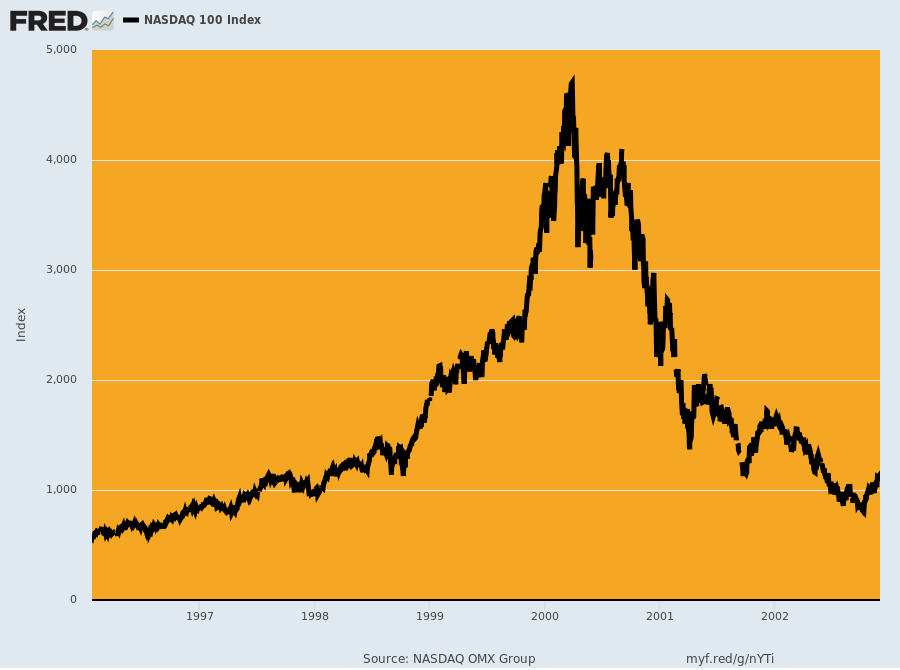 Those who rode it from the beginning ended up where they started in inflation-adjusted dollars. The speculators who jumped aboard along the way and the mullets who rushed in at the tippy-top lost their lunch – well, from the March 2000 peak, 83% of it…

They happen when equity markets are contaminated with bad money. They happen when false credit and excess liquidity overwhelm normal mechanisms of price discovery and two-way trading. They happen when discipline based on the proper weighting of the risk of loss and the cost of position carry is removed.

In June 2000, you didn’t have to be clairvoyant to see the coming cliff-dive. It was clear at the time, in the moment, that the stock market was riding high on speculative mania.

Miracles of the information age or no, nothing could possibly justify the Nasdaq 100’s 700% rise over just 48 months. It was a big, fat June bug begging to be smashed…

Greenspan’s basic recognition that rule-based fiat money growth was like farting in the wind should have given great pause to the denizens of the Eccles Building, to Imperial Washington, and to Wall Street.

For those who believe in sound money, it was an opportunity to re-anchor the dollar to gold, to reverse the mistake Tricky Dick made at Milton Friedman’s urging in August 1971.

Short of that, at the very least, it suggested the need for monetary central planners to take an extended sabbatical on monetary policy until they got a grip on the medium of money.