The urge to save humanity is almost always only a false-face for the urge to rule it. Power is what all messiahs really seek: not the chance to serve. This is true even of the pious brethren who carry the gospel to foreign parts.

Turns out equity indexes can go down, after all…

Today is the first trading session since last Friday that the S&P 500 Index, the Dow Jones Industrial Average, the Nasdaq, et al., have wallowed in the red.

These are just details, though, at this point. As Michael Coolbaugh noted in an alert to his Delta Profit Trader subscribers this morning, “The objective stats still suggest that the risks are tilted towards the negative side.”

As you well know, my read of the macro picture is that we’re heading for a disaster of epic, empire-toppling proportions. “Coronavirus” seems a matter of convenience for authority at this point, post-facto justification for that which they would have done in their behalf anyway…

In fact, the more monetary central planners attempt to keep the hope of Imperial Washington Consensus alive with their liquidity spigots, the more they ensure such an historic outcome.

At the same time, this kind of volatility – the up-moves as well as the down-moves – does create opportunity.

This week, Michael identified a total “insider” move on an options strategy we have in place for The Stockman Letter, and he’s also used this insane rally to position Delta Profit Traders for solid upside across a number of names in specific sectors that fit with our larger narrative here.

Yeah, that’s a mouthful. Simplify it by clicking here to get specifics on Michael’s trading system…

Meanwhile, it must come as a shock to the Tweeter-in-Chief that markets are down on Jobs Friday…

Of course, the Donald is a billowing bag of wind on economic matters, the following passage from his fawnfest with Bubblevision’s Joe Kernen all the evidence of that you need…

Kernen wonders about negative interest rates and the possibility they haven’t worked well elsewhere. Mr. MAGA doesn’t hesitate with a fog of incoherence:

Well, they don’t know yet. It’s so new. And you look at other countries where they actually have negative interest rates, negative in a positive way. I mean they’re actually getting paid – they make a loan and they end up… getting paid.

But – no, if Germany – and – we’re the most prime in the world. We’re the leader in the world. We have the dollar, and the dollar’s very strong. A lotta – a lotta things are happening. But, you know, we’re paying higher interest than other countries because of the Fed. If we were paying less, I would do it, and I’d pay off a lot of debt.

And what did Mr. Bubblevison have to say in response to that miasma of mental diarrhea?

On the matter of ultra-low rates, Kernen wanted to know if Jerome Powell is still in the doghouse or whether he’s finally getting the Federal Reserve’s price control mission right with respect to the cost of money: “Is Chairman Powell out of the doghouse?” this financial journalist asks. “Is he – are rates where they should be? Are you satisfied with the situation? Are we at a good level now, do you feel?”

Folks, this goes to the very heart of darkness that envelopes today’s financial world.

How in the hell does any President of the United States – let alone our current stumblebum – know where rates “should be”?

The question is no less galling if asked of any of the 12 only slightly more knowledgeable members of the Federal Open Market Committee.

The free market’s enormous and inexhaustible capacity for price discovery simply cannot be supplanted, matched, or even faintly approximated by the state – whether that’s the Donald or a cabal of monetary central planners.

Given the enormous size, speed, complexity, and interconnectivity of the money and capital markets – especially in today’s algo-driven world – it doesn’t require much thought at all to recognize that price discovery is a job for markets, not apparatchiks.

That’s the real irony of Bubblevision’s embarrassing fawning in the face of the Donald’s economic gobbledygook.

Kernen and his ilk have been marinating so long in Bubble Finance that they’ve developed a huge collective blind spot when it comes to the single most important pricing function in all of capitalism.

That is, the pricing of money, debt, equity, and their derivatives, which, in turn, drive the flow and allocation of capital throughout the entire economy.

Well, if Wall Street is disconnected from Main Street, it’s because irresponsible and/or innumerate authority make it so.

Kernen, in particular, has long postured himself as the great capitalist, conservative, and defender of markets against the encroachments of Imperial Washington’s meddlers and redistributionists.

Yet he doesn’t find it strange at all that the Fed not only pegs short-term interest rates to the exact basis point but, in the process, dominates, distorts, and smothers the money and capital markets in their entirety. 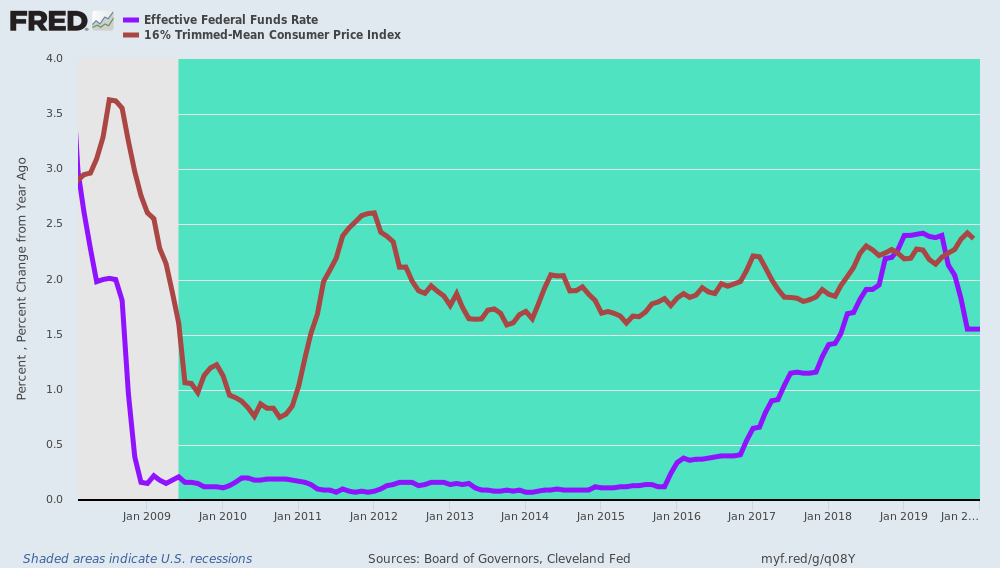 This stubborn, wholesale rejection of the free market in finance rests on a crucial unexamined predicate: that Wall Street-determined financial asset prices might be “correct” on the bourses and in the bond and money trading pits but they would be bad for Main Street and the performance of the macroeconomy.

That’s the essence of today’s tyranny of monetary central planning and the malignant speculation, malinvestment, and rent-seeking it enables, backstops, and propagates.

Meanwhile, there is absolutely no reason to believe that what is actually good for Wall Street – honest price discovery – would not also be good for Main Street.

But can you really blame the Donald alone for the economic crackpottery he’s wont to espouse? After all, what he told Mr. Bubblevision a Davos is just standard Wall Street/Fed folly with a cherry on top:

Now, with all of that, had we not done the big raise on interest, I think we would have been close to 4%, and I could see 5,000 to 10,000 points more on the Dow. But that was a killer when they raised the rate. It was just a big mistake. And they admit to it. They admit to it. I was right. I don’t wanna be right, but I was right.

That all of this has led to a financial fantasy world cannot be gainsaid.

Consider what Jamie Dimon said on CBS’s “60 Minutes” recently about the rosy health of the American consumer and therefore the U.S. and world economy:

The consumer, which is 70% of the U.S. economy, is quite strong. Confidence is very high. Their balance sheets are in great shape. And you see that the strength of the American consumer is driving the American economy and the global economy. And while business slowed down, my current view is that, no, it just was a slowdown, not a petering out.