“And, still, the entire Acela Corridor’s ruling elite – from Imperial Washington to Wall Street – seems euthanized to the developing calamity over which they preside.”

That’s where I left it on Wednesday before I handed things over to Michael Coolbaugh for his regular Thursday market commentary. As Mike noted, “With equities near record-high valuations, I get the urge to channel my inner Inspector Harry Callahan…”

That is: “You’ve got to ask yourself one question: ‘Do I feel lucky?’ Well, do you, punk?”

The Dow Jones Industrial Average is indeed off more thatn 500 points heading into the end of trading this week; and it’s been an adventurous one…

Of course, at the end of the day, in this politicized market, all roads – and all “bullet lists” – lead to Imperial Washington and the anchors it’s weighted on the Main Street economy.

Indeed, the Duopoly’s profligacy is down to domination by advocates of empire and the military-industrial-surveillance complex that feeds off it. The Welfare State is a multitrillion dollar bribe.

But we can certainly label some parties more guilty than others, like the Trumpified GOP.

Well, it’s been off to the races since the Donald arrived in the Oval Office.

During the most recently reported quarter – the three months ended September 30, 2019 – national defense spending had soared to $850 billion at an annualized rate. 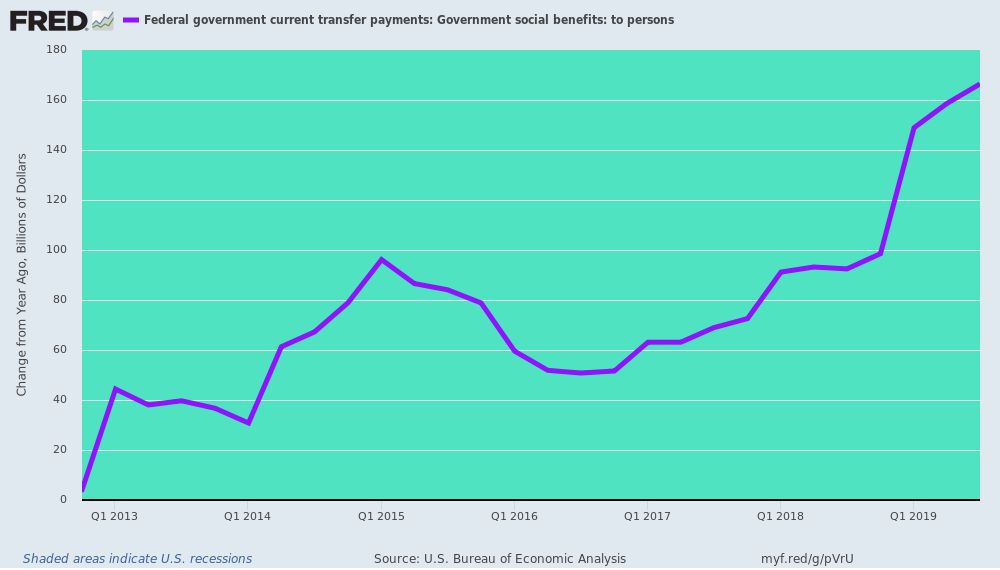 At the same time, there was no let-up in domestic spending, either.

In fact, the Trumpified GOP has all but surrendered on the big retirement entitlements – and right as the Baby Boom tsunami is about to swamp the rolls at a 11,000 per day rate during the Turbulent Twenties.

What that means, as a practical matter, is that spending growth is now accelerating based on the pure interaction of legal entitlements, enrollment growth, and high medical-cost inflation.

So, lack of legislative action to reform and curtail entitlements amounts to acquiescence in a sharply increased rate of spending growth.

During the third quarter of 2019, transfer-payment spending had already risen to a $2.35 trillion annual rate; the growth rate had already accelerated to 5.4% per year.

And it’s only going to get worse from here.

Accelerating rates of growth are a monumental problem. Compared to a gain of $51 billion per year in the fourth quarter of 2016, the rate of increase in transfer-payment spending had already accelerated by three times, to $166 billion by the third quarter of 2019. 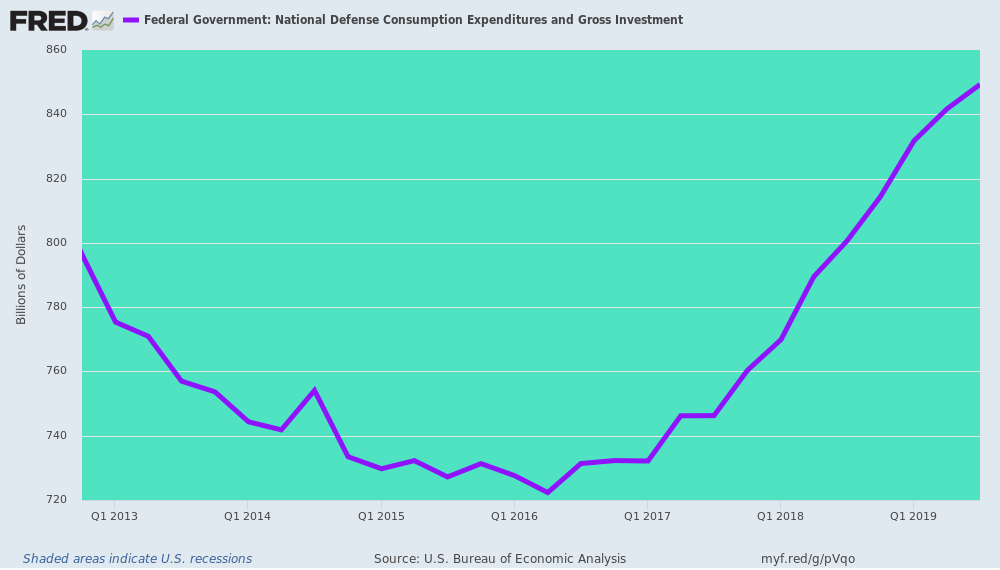 The same is true of the third great category of the federal budget: interest expense.

To be sure, this temporary flat-lining trend was an aberration. Even as the federal debt was growing by leaps and bounds during Obama’s second term, the Fed’s endless financial repression via “quantitative easing” had steadily lowered the weighted average nut.

Even though interest rates are artificially low, they’ve essentially been cycling in a range between 1.5% and 2.3% on the 10-year benchmark since the Donald arrived in the Oval Office.

Consequently, as the public debt has soared, so has gross interest expense.

Note that the annual deficit is soaring toward $2 trillion, and the built-in rise of the federal debt causes outstandings to rise from $23 trillion to $43 trillion during the decade ahead… 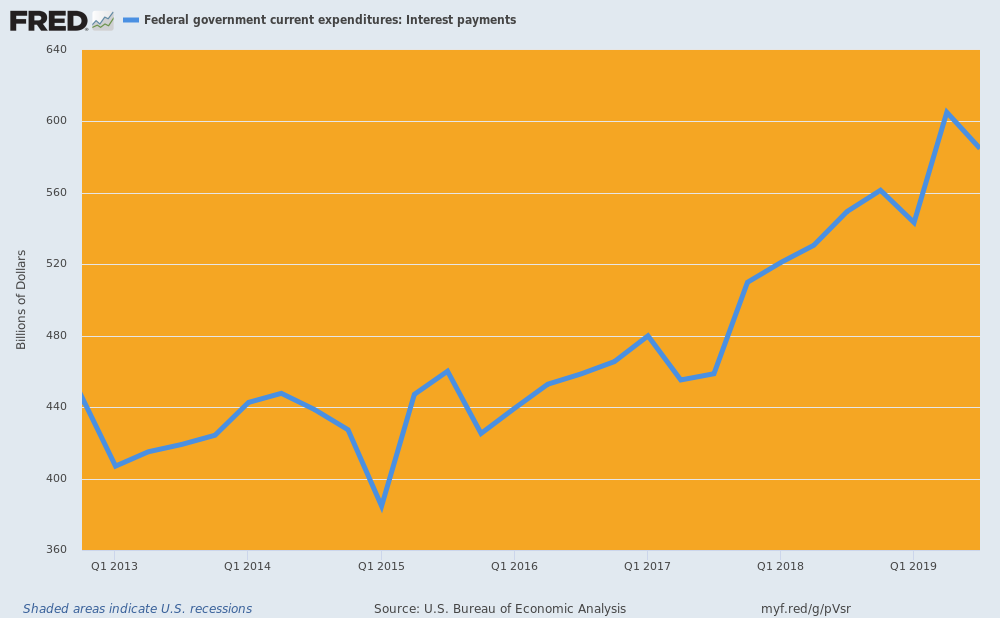 Of course, the Trumpified GOP pretends either that none of these baleful trends exist or that they have a “double-secret” plan to fix everything after the 2020 election.

They cling – first and foremost – to their incumbency and the perks and pelf of office. That’s why Republicans cut taxes by the staggering sum of $1.7 trillion on Christmas Eve 2017 without making even token efforts to offset the revenue loss with spending cuts or more benign forms of taxation.

So, the rate of federal revenue growth has sharply decelerated – the opposite of the accelerating spending trends. 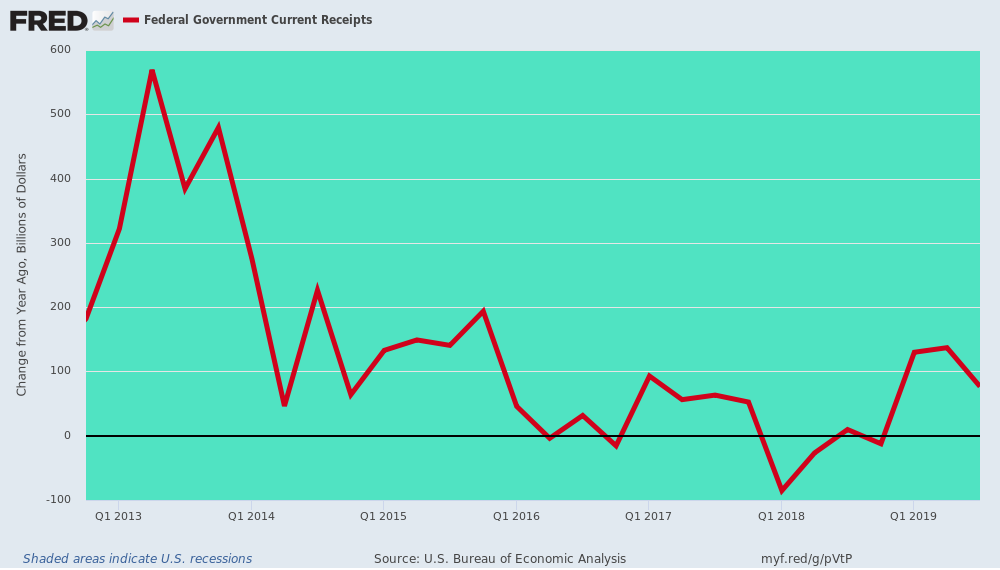 That represented a healthy 6.0% annualized rate of increase.

By contrast, owing to the 2018 tax cut and the decelerating rate of growth in 2019, federal receipts totaled just $3.62 trillion at an annual rate in the third quarter of 2019. Accordingly, the rate of federal revenue growth has slowed to just 1.37% per year since the fourth quarter of 2016.

Art Laffer and the other supply-side charlatans notwithstanding, that anemic rate of gain doesn’t sound like growing your way out of debt.

To the contrary, during the Donald’s 11 quarters in the Oval Office, federal spending has increased at a 5.32% annual rate. That’s nearly four times faster than receipts.

If the Trumpified GOP has a fiscal formula, it amounts to burying the nation in public debt.

And it virtually guarantees the interest-rate-clubbing Fedheads will continue to expand their balance sheet and monetize it all.

The question is, how long will this massive stock market bubble survive the fiscal and monetary disasters dead ahead?

When the Stakes Are High