It was like when you make a move in chess and just as you take your finger off the piece, you see the mistake you’ve made, and there’s this panic because you don’t know yet the scale of disaster you’ve left yourself open to.

It’s yet another “green” day on Wall Street, folks, as this central-bank-driven rally continues. The Dow Jones Industrial Average may not breach 30,000 tomorrow or even Monday, though not for any lack of monetary central planning…

Days – weeks; heck, months – like this are why we have Michael Coolbaugh guiding us along this market’s treacherous terrain. His system – focused on facts and data and trend and momentum – will help us profit on the upside as well as on the downside.

Now is a time to take some upside. If you’re in on The Stockman Letter, you’ve followed along with multiple trade alerts – including one today – about the market and some actionable steps you can take to maybe build some wealth. If not, today is a great time to signup.

Today’s alert was particularly compelling, as it included a pretty “insidery” tip on how to use a particular option strategy to “trade around your position.” To invoke a phrase good basketball coaches who build winning teams with strong defense use, you’ve got to keep your feet moving.

Michael’s doing that for us. And good defense, of course, often translates into good offense…

OK, here’s Mike with his latest observations on the market…

How to Spot Impending Disaster

Have you ever seen a train wreck up close in person?

OK, I don’t mean literally because, thankfully, they are quite rare.

But let’s talk figuratively for a moment.

When tech stocks went parabolic in 1999, most grizzled veterans knew it would end badly.

When Bitcoin went bonkers in 2017, yet again most scorned traders knew it would end badly.

And, now, here’s Tesla (TSLA), which managed to run over just about anyone who dared to bet against its meteoric rise.

But, rest assured, just as with every case before it, the high school students posting Instagram videos of how “easy” it was to make thousands of dollars trading Tesla stock over the short course of morning breakfast… this, too, will end badly.

This isn’t to opine on the merits of Tesla’s technology, operational efficiency, or its wildest business prospects.

Rather, the party in Tesla will end badly for one reason and one reason only: It’s just the latest case of human greed gone wild.

But, while everyone else is so laser-focused on Elon Musk’s proclivity to taunt short-sellers around the world, I want to direct your attention to another train wreck, one that appears to be traveling at a much slower pace.

I’m talking about the North American oil and gas industry.

You see, the great thing about identifying slow-moving train wrecks is that they can provide a self-replenishing list of what are called ‘derivative’ trades.

Not “derivative” meaning a financial contract like futures or options, but, rather the “knock on” effects, like the slip of one icicle and quickly turns into a disastrous avalanche.

Everyone immediately identifies the first-order effect: rising bond prices. But how is it that some traders manage to turn a 5% rally in bond prices into a 50% gain for their total portfolio?

Sure, some employ a lot of leverage. But the true mastery comes from identifying the second-, third-, fourth-, and even fifth-order effects.

As you can see, these links can run quite deep…

It’s why I so thoroughly enjoy finding a certain macro theme, because when the market begins to suggest my thesis is correct, I stick with it for a period of time. I stick with it to try and ride the avalanche all the way down the mountain.

So, you’ll have to forgive me, but we’re talking about that pesky yield curve again.

Just last week, I pointed out that the evidence continues to suggest the yield curve does, in fact, still matter.

I won’t harp on the mechanics again; I’ve already demonstrated at great length how the yield curve has direct implications for bank lending activity.

Assuming this standard economic theory still holds any weight, we can see how a drastic tightening in lending activity could spell doom for an industry that, to this point, has received an endless stream of capital.

In other words, we can start to evaluate the second-, third-, and fourth-order effects.

Here’s what I mean…

According to Moody’s Investors Service, the North American oil and gas industry is facing a crippling wall of debt maturity over the next four years.

Here’s what The Wall Street Journal had to say:

It is unclear how they will repay it all. Shareholders and private-equity investors have been burned in recent years attempting to buy at the bottom. Banks are in retreat. Bond markets have shown little indication that they are open to any but the oil patch’s most attractive buyers.

I get it; just about everyone knows the energy sector appears cheap. But we have to ask ourselves, “What will spark a turnaround?”

At the top of that list would likely be higher oil prices.

Here’s a major reason why… 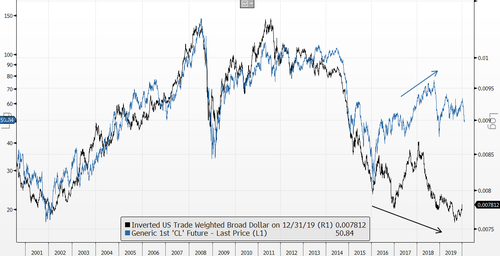 The black line representing the U.S. dollar on this chart is inverted to better demonstrate the correlation. A “rising” black line would indicate a weaker U.S. dollar.

Extensive cuts from OPEC+ couldn’t do it.

An Iranian torpedo to Saudi Aramco facilities couldn’t do it.

The U.S. assassination of an Iranian general and subsequent tensions across the Middle East couldn’t do it.

The U.S. has, defiantly, become energy independent. And, while we’re fully capable of fulfilling our energy needs internally, the excess oil must be exported.

In fact, the combination of a stronger U.S. dollar and rising oil prices is now a double whammy to foreigners who import oil from the U.S. If foreigners struggle to purchase our excess oil, well, we have a serious supply-and-demand problem.

When a certain asset fails to sustain a rally on what seems like an endless stream of positive developments, it’s often a sign there’s something structurally wrong.

Barring an earth-shattering move by J. Powell & Co. that would significantly weaken the U.S. dollar – and, believe me, with all the “not QE,” they have been trying – the downward pressure on the price of oil, and, with it, the stocks of various energy companies, will only continue to increase.