It’s discouraging to think how many people are shocked by honesty and how few by deceit.

This decade-long bubbled-up “recovery” since the Global Financial Crisis/Great Recession has come with considerable costs.

Among others, it’s reduced the Acela Corridor to a Fantasyland. On any given day, you only need contemplate prevailing headlines and memes to see it in action.

But Imperial Washington’s dream is at least as fevered, as evidenced in a recent Bubblevision appearance by Rep. Kevin Brady.

Brady, a Republican from Texas, happens to be the author of the $1.7 trillion Christmas Eve tax cut paid for on Uncle Sam’s tapped-out credit card.

But, just a couple weeks ago on CNBC, he had the gall to say it’s working as planned, it’s increased Imperial Washington’s revenue take, it needs to be made permanent after most of the individual cuts expire in 2025.

For crying out loud…

That was within a day of the Congressional Budget Office publishing the 10-year fiscal outlook summarized in the table below.

It projects $13.2 trillion of new debt over the next decade and a deficit of 5% of gross domestic product (GDP) into the indefinite future.

Folks, our debt-to-GDP ratio will hit a Greece-style 150% within two decades.

Yet even that dire scenario assumes no recessions occur, ever again, and that the Trump-GOP tax cuts are allowed to expire in 2025, as scheduled.

It also builds in the positive deficit impact of myriad expiring loopholes and out-year spending cuts, which otherwise keep getting deferred as their effective dates draw near. 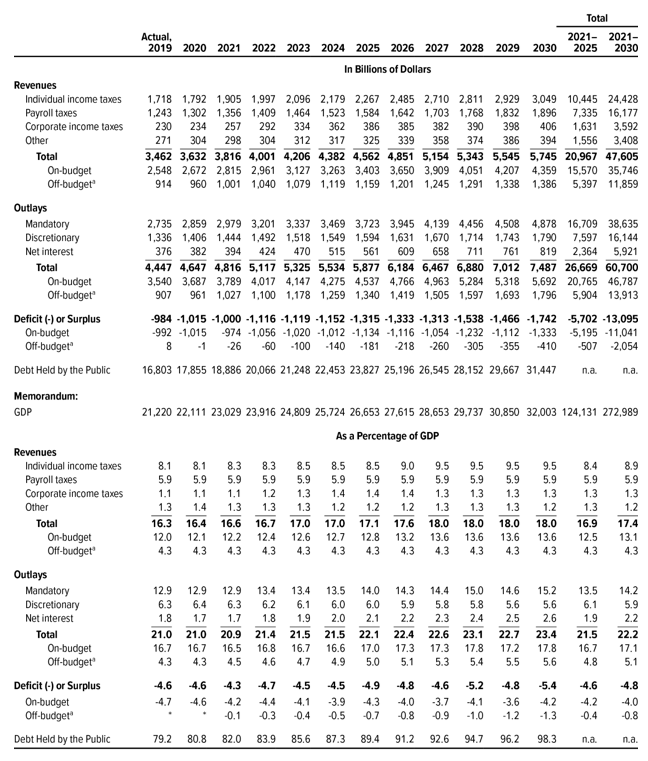 What Brady and his ilk are really after is a permanent extension of the Trump tax cuts that would increase the flood of red ink by another $3.8 trillion over a 10-year period.

That sure would expose the scam perpetrated in 2017, when the cuts were made to abruptly expire in order to stay within the 10-year revenue loss prescribed in the budget deal.

And it would also bury the nation even deeper in public debt.

But factor in just a mild recession between now and 2030. Also, account for the absolute political certainty that scheduled out-year spending cuts get deferred (they were put there in the first place for “window dressing” purposes). And, I hate to break it to you: Those expiring tax cuts and loopholes will get extended – K Street will see to that.

So, the true baseline deficit over the next 10 years is closer to $20 trillion.

And total public debt would hit $43 trillion before 2030.

When asked about trillion-dollar deficits and whether defense cuts should be part of the solution, Brady wasted no time spewing the GOP’s risible talking points.

And that means only when Democrats are ready to give them political cover will Republicans talk entitlement reform.

Likewise, since combined defense and non-defense “discretionary spending” is only $1.4 trillion out of a $4.6 trillion outlay budget, it’s not really the problem.

Here’s the thing, and it’s a mouthful…

If you insist on taking the headline defense budget from $550 billion, which was already way too high, to $740 billion, as Trump’s GOP has done since 2016, and you don’t put a scratch on $2.9 trillion per year of entitlement spending until the Dems embrace it, you don’t have the right to promise even more trillions of tax cuts, no matter how appealing the proposition is as a matter of philosophy or equity.

Sixty-five years ago, President Eisenhower got it right when he said that the high Roosevelt-Truman tax burden must come down. Ike also had it right that the GOP had to earn the right to relieve the taxpayers by first cutting spending and balancing the budget.

Today, GOP of Trump and Brady stands for just the opposite.

They propose to cut taxes morning, noon, and night. They goose the defense and discretionary spending budgets year after year. And they blame Democrats for the resulting deficits because they’re unwilling to attack the Welfare State.

And that’s why America is heading for fiscal catastrophe.

Republicans form the party of the Warfare State, Democrats champion the Welfare State, and never the twain shall face fiscal scrutiny.

The GOP’s risible hypocrisy is highlighted by two sets of figures in the CBO table.

The first is that the sum of mandatory spending and interest expense will rise from $3.1 trillion in 2019 to $5.7 trillion by 2030. That’s a gain of 83%. But Brady and his GOP colleagues insist they can’t and won’t do a thing about it until the Democrats sign a blood oath not to campaign against Social Security and Medicare cuts.

And that will never happen.

The second is that the federal revenue share of GDP is only 16.4% in fiscal 2020 and would stay at 17% or less indefinitely if the expiring Trump tax cuts are made permanent. But spending is heading for 23.4% of GDP by the end of the decade.

And that’s even under the CBO baseline without the increased interest expense burden of extending the tax cuts and the likely recession-driven downturn in receipts sometime during the coming decade.

And the latter will surely happen. As it is, the current expansion is already the longest in history. By 2030, it would be more than double the 119 months of the 1990s expansion. And that one happened under far better circumstances.

Duration of Economic Expansions Since 1945 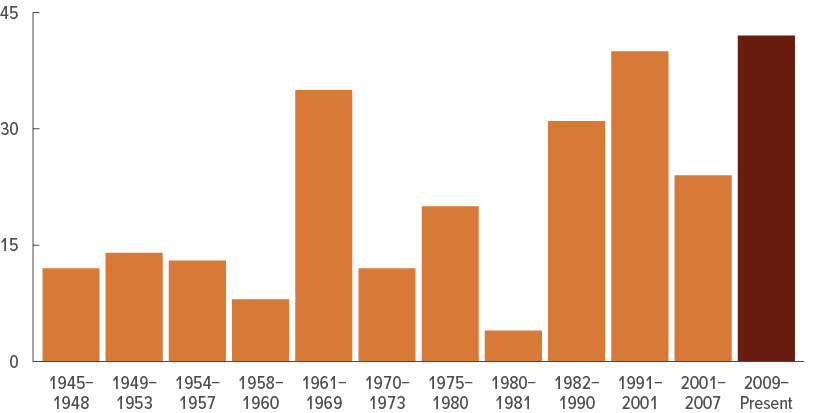 That’s why the GOP’s tax cut fairy tales are so lame. They aren’t remotely “paying for themselves.” And there’s not a snowball’s chance in hell that even more tax cuts would relieve the massive structural deficit depicted in the CBO table.

Here’s what’s happening in a nutshell…

The spending side of the federal ledger is being driven to historic highs by the demographic tsunami of Baby Boom retirements hitting the Welfare State budget. At the same time, neocon/neoliberal interventionist domination of the Duopoly is ballooning the Warfare State budget. 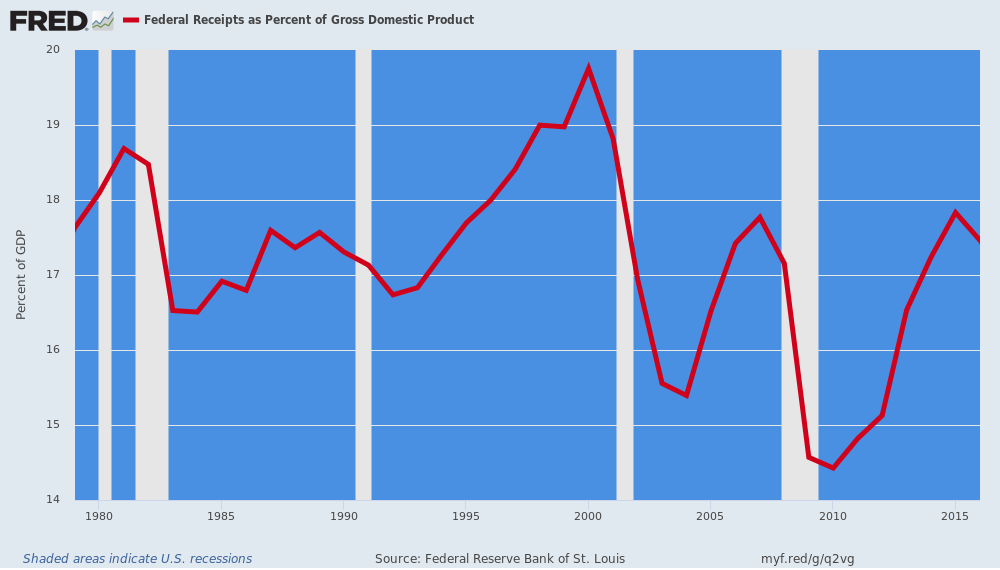 That’s Enough About the Blob…