The ill effects of monetary central planning are nearly endless. Foremost among them, though, is its corruption of the financial and economic culture.

There is simply no end to the rot. Consider the Donald’s proposed budget for fiscal 2021. Unveiled on Monday, the plan includes cuts to the Welfare State. But it also includes massive increases for the Warfare State. And, well, of course it does those things.

There’s one other thing, though, and it demonstrates as much as anything that the rot has reached all the way to top. Here’s the estimable and aggravated David Rosenberg with the only “data” that really matter:

We are so torn from reality. And it’s only going to get worse.

Constant intervention by central banks to prop up stocks and other risk assets leads to exactly the wrong kind of discounting and, therefore, rampant, unnatural complacency.

Instead of pricing in the myriad factors that would upset growth and earnings, markets militantly discount nearly every manner of risk. Buyers do so upon the conviction that the Federal Reserve has their back and won’t tolerate any sustained correction of equity indexes.

Indeed, every coronavirus-driven selloff is met with Bubblevision’s “buy the f***ing dip” mentality.

There is, apparently, nothing that man, god, or infinitely foolish power-grabbing and war-mongering governments can do anywhere that monetary central planners can’t fix.

So, Wall Street’s reckless business of pricing in perfection and ever-rising price-to-earnings multiples are nothing to sweat.

The screaming proof for that predicate surely was the market’s 30% surge last year in response to the pathetic Powell Pivot. That was January 4, 2019, exactly after the 19.9% plunge for the S&P 500 Index during December 2018.

In a monetary heartbeat, the Fed threw to the winds a long overdue plan for normalization of interest rates and its balance sheet and did the unthinkable.

In the face of the lowest headline unemployment rate in 50 years and a still-expanding business cycle, our monetary central planners abandoned planned rate increases and instead cut them three times to an idiotic 1.55%.

And that occurred even as it shit-canned “quantitative tightening” and started flooding the market again with $425 billion of freshly minted cash during the final quarter of the year.

That’s OK, though, because we have Michael Coolbaugh on the case…

Historians will surely mark the 2019 Powell Pivot as one of the most mendacious episodes of central banking ever.

There was no “emergency” extant in the domestic or international financial markets during the fourth quarter of 2018. Yet the Fed was pumping credit at a $1.6 trillion annual rate – a that even exceeded Ben Bernanke’s furious printing during the depths of the Great Recession.

As we’ve often discussed, the very idea that the mighty U.S. economy couldn’t stand the 2.40% money-market rate that prevailed on the eve of the Powell Pivot is a bad joke.

The trend rate of inflation change, as measured by the stable CPI less food and energy, stood at 2.21% on a year-over-year basis in December 2018. It posted at 2.25% in December 2019. It never dropped below 2.00% during the entire year of furious Fed retreat and liquidity pumping.

The cowards in the Eccles Building would have us believe that a 15 to 20 basis point real rate of interest in the money markets – essentially a funding arena for Wall Street speculators and carry traders, not Main Street households and businesses – would kill prosperity in its tracks.

After the Christmas Eve bloodbath last December, they were in deathly fear of an accelerating Wall Street hissy-fit. 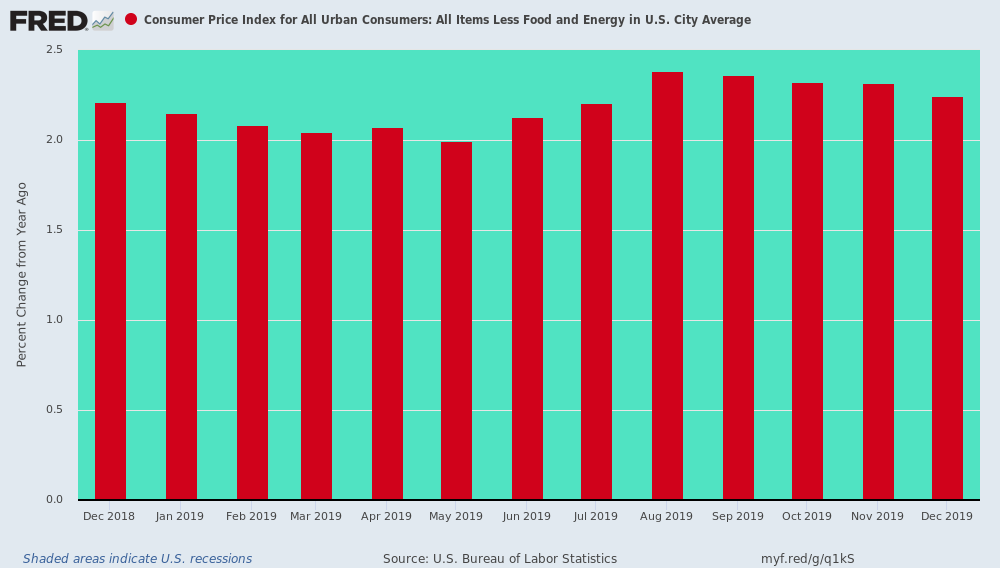 So, they invented an excuse: an insurance cut to keep the expansion going. But they had only one purpose: to stimulate the blow-off top that delivered the casino right into the jaws of the coronavirus and all the other real-world risk vectors coming down the pike as the Turbulent Twenties get underway.

This capitulation and coddling would be bad enough if the only thing it did was to intoxicate the traders and gamblers and induce them to get in way over their skies.

But Wall Street doesn’t operate in a vacuum. It’s a massive, elaborate, and potent signaling system. And it encourages every manner of dangerous and uneconomic behavior on Wall Street and Main Street alike.

If stocks were trading at rational price-to-earnings multiples, of course, they could probably tolerate a pandemic or two. Sooner or later they do end, and human ingenuity does find ways to recapture over time the lost output and interruption costs that they entail.

But when the signal is to “buy the f***ing dip” – over and over and over – because monetary central planners are riding to the rescue, well, it’s time to mark the exits.