There is nothing I detest so much as the contortions of these great time-and-lip servers, these affable dispensers of meaningless embraces, these obliging utterers of empty words, who view every one in civilities.

At this rate, we’ll be talking about Dow 30,000 maybe by Friday, Monday at the latest…

It’s just that uncertain right now. Oh, monetary central planners all over the world are doing their best to keep stocks afloat. That’s all they can do. Rate cuts and liquidity injections – as the highly respected, widely followed Liz Ann Sonders noted today – have done much for stock prices.

But they haven’t done much for Main Street.

That’s the thing about the State of the Union… It’s neither the Speaker’s drama-queen moves nor the Donald’s own performative bullying. It’s the substance that’s lacking, and nobody gives a care, least of all Mainstream Media’s courtesans inside Imperial Washington.

The bottom line is this is not the “greatest economy ever.” And America’s decline continues, unabated, without regard to the Tweeter-in-Chief’s bile, bombast, braggadocio, and bullshit.

He’s also got Flyover America in his pocket. We’ll see what happens if this bubble collapses before November, but, right now, Trump 2020 has the wind in its sails.

And it’s more than a little ironic.

Start with the fact that the bottom 50% of households – the very voters of Flyover America who put the Donald in the Oval Office – have actually been far richer than they are today.

No matter how you slice it, the real wealth of much of American society has been shrinking for the entire 21st century and is now 30% below where it stood when Bill Clinton was packing his bags to shuffle out of the White House… 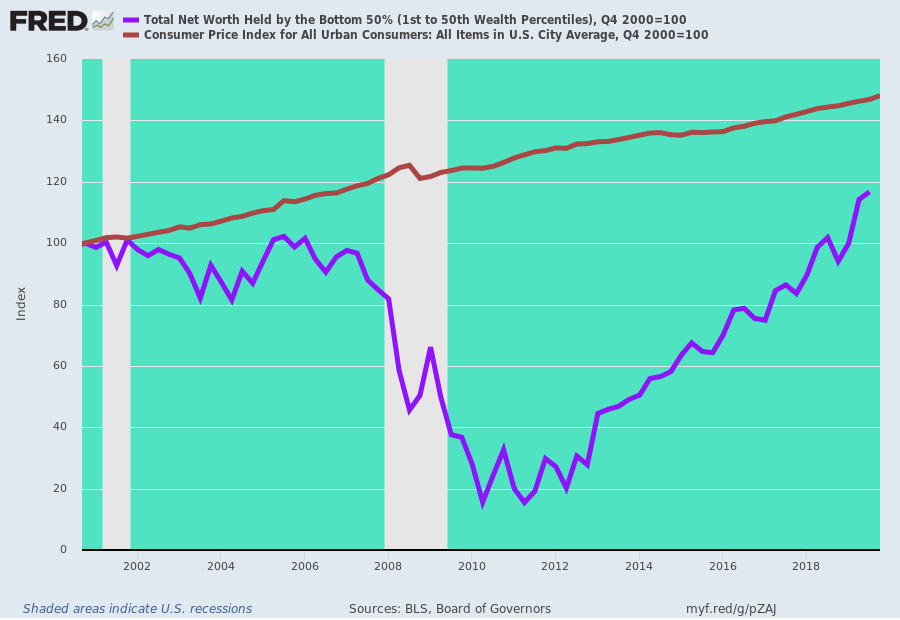 Indeed, even Mr. MAGA himself is thoroughly corrupted by the malignancy of monetary central planning. Look no further than the transcript of his extended interview with CNBC’s Joe Kernen at the World Economic Forum in Davos a couple weeks ago.

It’s well and truly a case of a fawning empty suit talking to a billowing bag of wind. Almost nothing that passed between the two is even remotely anchored in the foreboding realities that stalk the planet.

In the first place, and despite all the White House and Wall Street cheerleading, there’s no difference at all between the Trump economy and the Obama economy, once the we got out of the recessionary woods during his first term.

That is, whatever ailed the U.S. economy under Obama hasn’t gone away. And there’s no “MAGA trend” improvement whatsoever. None.

Of course, neither Obama nor Trump had much to do with those modest rates of expansion. In both cases, tepid gains were down to capitalism, modulated from quarter to quarter by the push and pull of the global economy, most especially the powerful credit impulses emanating from the Red Ponzi.

But it’s impossible to tell where the Obama economy ended and MAGA began without looking at the date axis.

The overlooked point is the more crucial: The “Trump Economy” isn’t strong. It’s just very old at month No. 128 of the longest, weakest recovery in history.

There’s never been so much unsupportable debt and so much growth-impairing malinvestment and state-imposed distortion on the economy as at present. 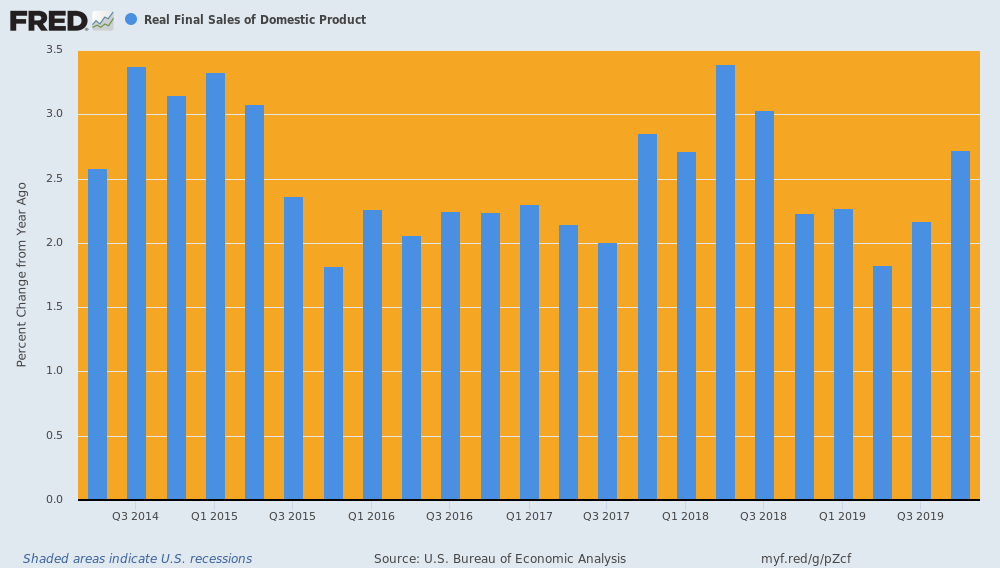 Before we go any further, let’s agree that the correct labor variable is hours employed, not headcounts. That’s because the quality of “jobs” has been deteriorating for several decades when measured by average weekly hours and rates of pay. So gross job counts are not comparable over time.

The quality of aggregate hours employed as measured by rates of pay and benefits has also deteriorated over the last several decades. But this metric is not nearly as misleading as the headcount-based Bureau of Labor Statistics (BLS) numbers.

Peak year-over-year hours gains have been steadily deteriorating since the Reagan boom of the 1980s. 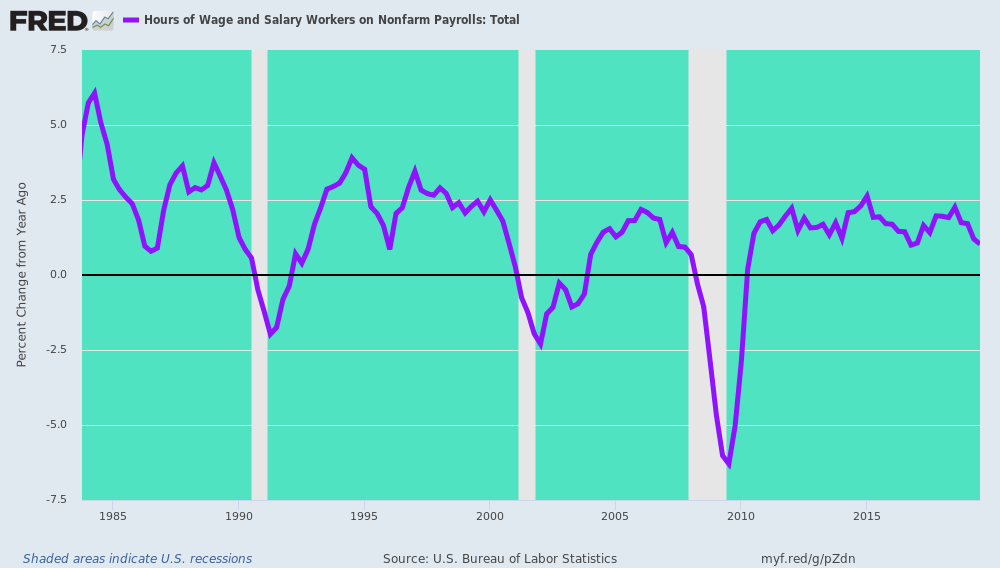 Back in the day “strong” meant 5% per year gains at the peak and more than 2.5% year-over-year gains during most of the expansion.

The peak rate of hours gained dropped to 4% per year during the technology boom of the 1990s. It sank to 2.5% during the Greenspan-blown housing bubble between 2001 and 2008. And it plumbed to hardly 2.0% during most of the long expansion since the Great Recession.

It’s now fallen to just 1.0%, and indication the tax-cut-induced Trump sugar high of 2018 is already over and done, with labor-hour growth once again sliding toward the flatline.

So, call it what you will. It’s just not strong. And it’s certainly not accelerating.

And, if you’re getting less and less growth over each business cycle on the account of brute force labor hours employed, the only other source of output gain is productivity improvement.

During the present simulacrum of recovery, not so much…

The productivity growth rate since the pre-crisis peak is just 1.27% per year. That’s barely half its historic levels. And there’s no acceleration here either.

That’s about as basic as it gets; after labor hours growth plus productivity gains, there ain’t nothing but hopium…

At the end of the day, you can’t entirely blame the Donald for boasting loudly and egregiously. That’s what he does.

But it’s a measure of the power hunger at both ends of the Acela Corridor that he’s made to sound only like a showman echo of what amounts to the prevailing narrative.

And, still, the rot and the malignancies hover just below the surface…

A Bite of Reality