We have more news today confirming we’re at a slow boil… and that the “leader of the free world” is a MAGAlomaniacal know-nothing grifter.

Even the major equity indexes were on edge mid-morning, as details of the hideous attack in New Zealand filtered into the general consciousness.

The Tweeter-in-Chief was on his favorite platform, offering “thoughts and prayers” 20 minutes before eight. At 8:03 a.m. he was endorsing a “Jexodus” from the “Democrat Party” to the GOP.

The Donald is all about the Donald. Given the array of Deep State assets deployed against him, he’ll need all the electoral help he can get to stay out of prison and to preserve as much of his “billions” as he can.

He’ll do what it takes to stay free and rich – all the bile, bombast, braggadocio, and bullshit he can muster.

That inability to see a world beyond himself explains why the Donald doesn’t get the bad money thing at all.

It’s perhaps the ultimate irony of the empire phase of American history: There would be no President Trump without the misbegotten theory that rising prices are a growth tonic.

Even in ordinary circumstances, central bank stimulation of commodity and consumer prices can only wreak havoc. It fosters excessive debt. It encourages speculation. It breeds inefficiency. It creates malinvestment.

And it transfers economic resources from workers and savers and retirees to borrowers and gamblers and grifters. It favors the leveraged… in real estate, for example…

That’s what’s been happening since 1987.

That’s when Alan Greenspan’s 19-year term as Chair of the Federal Reserve started. And his baleful regime lined up with a massive inflow of cheap labor into global commerce that had been sequestered in the statist poverty of the communist world.

They wanted Greenspan. And Reagan was under the impression that Greenspan was, actually, a gold standard advocate.

Indeed, he’d famously brought Ayn Rand to his swearing-in ceremony as Chair of the Council of Economic Advisors during the Ford administration.

The Gipper himself favored sound money – in private moments, when he wasn’t scripted by the Wall Street operatives and Keynesian economists who populated his administration.

Greenspan soon learned that sound money and Republican politics had parted ways at Camp David in August 1971. Henceforth, Uncle Milton Friedman had decreed, a brain trust of monetary eunuchs would safeguard the value and integrity of the nation’s money…

When his time came, the man Wall Street and Imperial Washington would have us call the “Maestro” deftly invented his own form of surrogate for the actual gold standard deflation that was urgently needed.

He did it because he didn’t want to get “Volcker’d” by the very political assassins who’d done in Tall Paul.

He called it “disinflation.” “Disinflation” is a rubbery concept that essentially means “whatever rate of CPI gain resulting from running the Fed printing presses overtime.” All anybody wanted – at first – was something reasonably lower than the extreme inflation of the 1970s.

Between 1992 and the end of the Maestro’s term in 2006, the Consumer Price Index (CPI) rose by 44%. It’s levitated ever higher by his inflation-targeting successors. 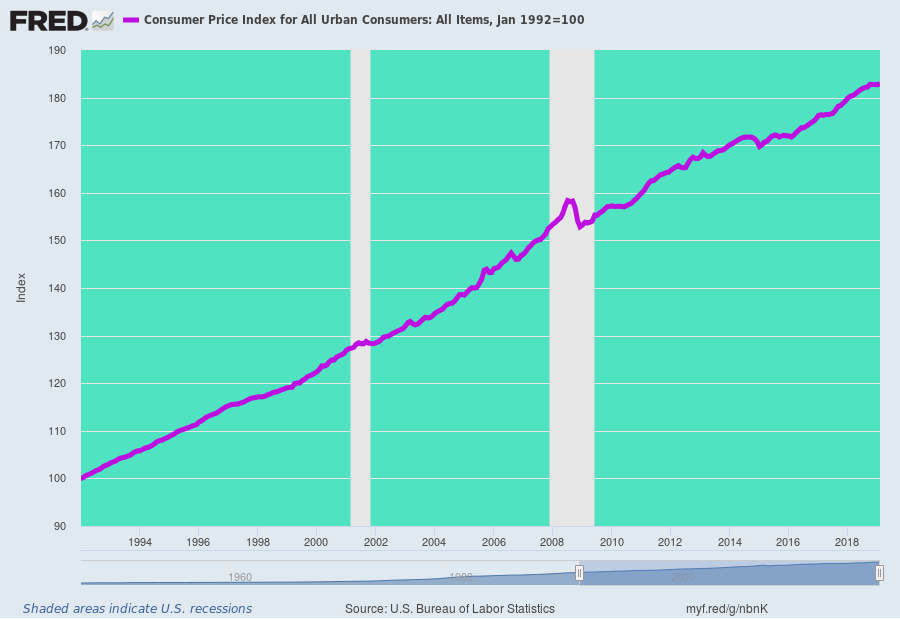 Ben Bernanke got the domestic price level to a point 68% higher than its 1992 starting point by the time he left office. Jane Yellen and Jerome Powell have taken the CPI to 83% of where it stood when the flood of cheap labor began pouring into the global economy after 1991.

It’s inconceivable under a regime of sound money.

“Bad money” drove the hollowing out of America’s productive economy. That’s what led to the offshoring of good middle-income jobs. It explains the growing divide between Wall Street and Main Street.

And it makes most of the people unhappy.

Safe and Sound (and Opportunistic…)