Like the elite of ancient Egypt, most people in most cultures dedicate their lives to building pyramids. Only the names, shapes and sizes of these pyramids change from one culture to the other.
– Yuval Noah Harari, Sapiens: A Brief History of Humankind (2011)

That includes the Donald, the alleged billionaire who took a day off from Impeachment Theater to address this equally august gathering of global-elite movers and shakers.

There were also 1,500 private jets crowding the surrounding airports – excess that must have drawn the ire of the train-traveling 17-year old expert on planetary climate science Greta Thunberg.

Surely among the 10 billionaires in attendance from communist China was Ren Zhenfei, founder of Huawei and father of its CFO, Meng Wanzhou.

Even as dad courted the rich and famous on the slopes, daughter languished in a Canadian jail, awaiting extradition to the U.S. because she had the audacity to do business with Iran against Imperial Washington’s instructions and contra the Tweeter-in-Chief’s latest fatwa against Tehran.

According to Forbes, 20 years ago the combined net worth of the world’s billionaires was $1 trillion.

At this bubble-icious, moment that number is reckoned at just under $10 trillion. So, the 2,150-member global Billionaires Club now has more net worth than 60% of the world’s population combined. That’s 4.6 billion people!

Noting these facts doesn’t put me in with the Bernie Sanders/AOC/Pocahontas brigade. In a world of free markets, honest money, and de minimis government, the more billionaires the better.

What I doubt is that there was an honest and sustainable basis for a 10X gain in the net worth of the Billionaires Club over a two-decade period when nominal global gross domestic product (GDP) only grew from $35 trillion to $85 trillion, or by 2.4 times.

After all, the predominately financial assets comprising the world’s net worth are merely the capitalization of its underlying income, or GDP.

And there’s no basis in either sound economics or basic math for the former to grow nearly four times faster than the latter for two decades running.

Unless the age-old laws of sound money have been repealed by the economic gods themselves, Davos Man is fixing to become nearly as rare as Neanderthal Man.

Or, maybe this has been a case of Piltdown Man all along…

Recall that the latter had been touted by some British scoundrels in 1912 to be a 500,000-year-old homo sapiens and evolution’s missing link. Alas, it was a ho-hum 50,000-year-old human skeleton fused with the jawbone and teeth of a modern orangutan.

It took the world about three decades to figure out that Piltdown Man was a hoax.

But the hoax attendant to Davos Man is already plain as day.

By even tolerating Greta’s “impending extinction” hysteria and the Donald’s hideous “greatest economy ever” boasts, the assembled billionaires demonstrate that they are not 4X geniuses after all.

Indeed, I suppose some kind of guilt-tripping accounts for the grandly named World Economic Forum’s solicitude for the global warming scam and its program-perfect poster girl.

But why in the world would the purported deep thinkers of Davos not laugh the Donald’s malarkey right off the stage?

On the way to Switzerland, he tweeted a superlative that would be the envy of the biggest braggart in the school yard…

And he thickened the goo while at the podium in Davos:

America’s newfound prosperity is undeniable, unprecedented and unmatched anywhere in the world… America made this stunning turnaround not by making minor changes to a handful of policies but by adopting a whole new approach. Every decision we make… is focused on improving the lives of everyday Americans. We are determined to create the highest standard of living that anyone can imagine.

Folks, that’s just blithering poppycock. We’re at the end of the longest and weakest business cycle expansion in history, yet real median household income has barely returned to where it stood two decades ago.

The idea that Trumponomics has anything to do with paving the way for the “highest standard of living that anyone can imagine” is just content-free bluster.

The facts show that the American standard of living has been stagnant for two decades. It’s risen and fallen with the business cycle, gaining, on average, the grand sum of $87 per year (in 2018 dollars) since 1999.

Data for 2019 aren’t yet available. But it’s evident that the various categories of income gain last year barely kept up with inflation. So, real median family income was flat.

And the coming recession in the early 2020s will send the black bars in the chart sliding lower as they did during and after each of the recessions marked by the white space. 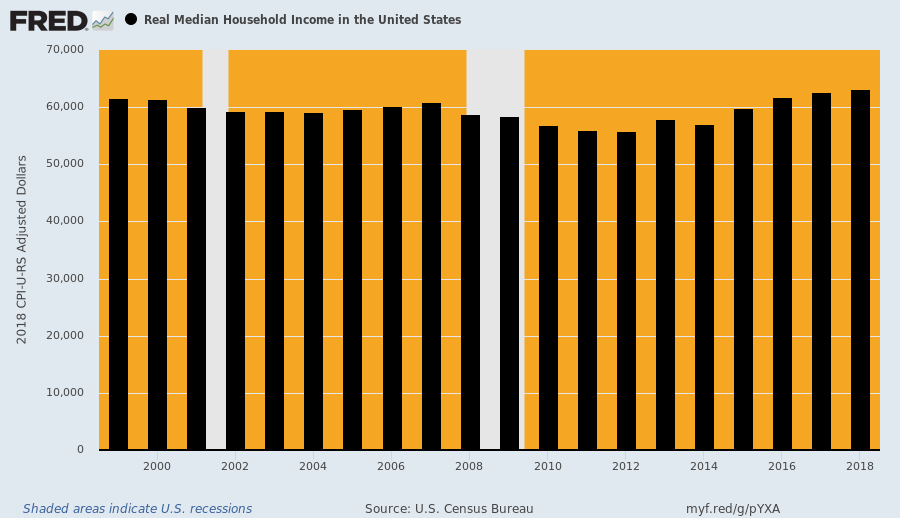 The Donald’s policies have immensely harmed the foundations on which today’s tepidly expanding business cycle rests.

Yet there’s been no short-run benefit in terms of accelerating overall GDP growth. In fact, we’ve seen a sharp deceleration of business investment and export growth.

Likewise, the vaunted 70% of GDP attributable to personal consumption spending is being kept alive by borrowing.

Nearly 67% of the gain in personal consumption expenditures since the fourth quarter of 2012, when the U.S. had fully recovered from the Great Recession, has been accounted for by household debt growth. 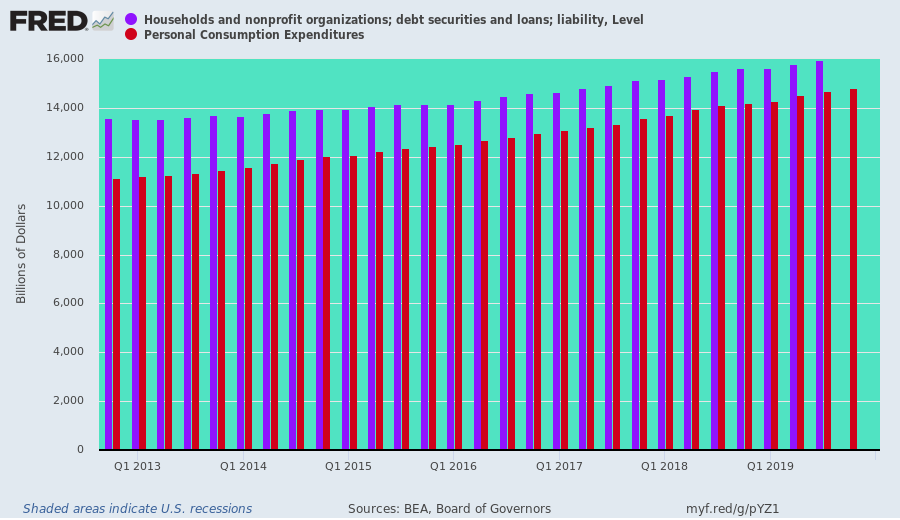 What the “strong economy” gummers forget, of course, is that, sooner or later, you have to pay the piper. And you’re supposed to pay down debt during the “up” phase of the cycle. But that hasn’t been happening this time around.

Boast all you want about the “greatest economy ever” to stock-options-rich crowds.

But it doesn’t gainsay the unsustainable economic and monetary rot upon which it’s all based.

We’re heading for a lot of strum und drang in the Turbulent Twenties.

But the alleged adults in the room don’t have a clue. They think America’s fantasy of “free lunch” economics and unhinged partisan warfare is sustainable indefinitely. 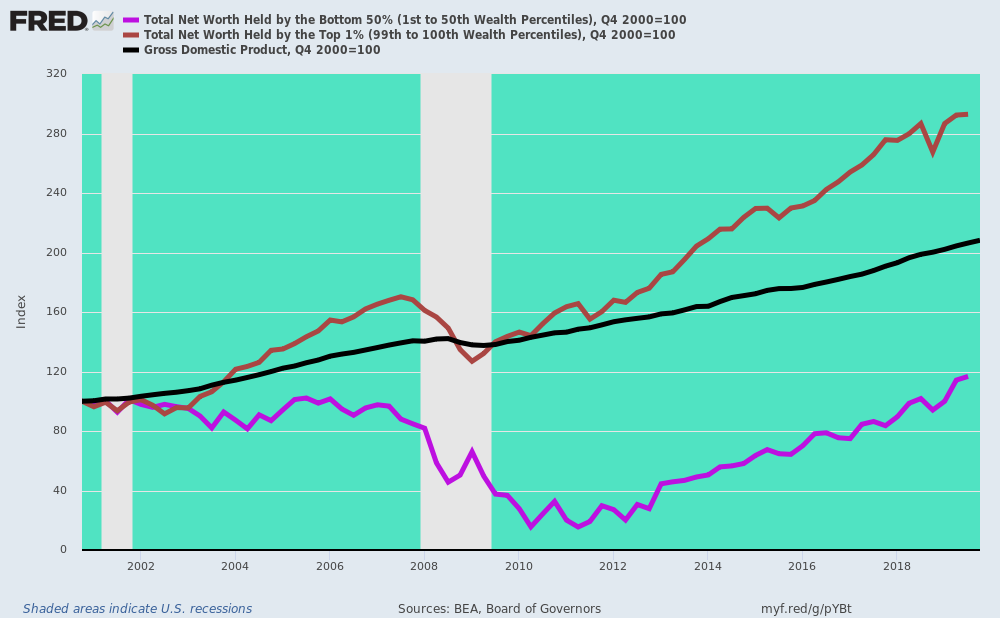 If you’re sitting on phantasmagorical stock market paper values and not sweating bullets about the implications of central banks’ $25 trillion balance sheet, the world’s $255 trillion of debt, the Red Ponzi’s monumental malinvestment, the Donald’s wars on trade, immigrants, and (fiscal) sanity, the Duopoly’s assault on constitutional government in America, the Empire’s claim to global extraterritoriality, and the statist grab for power in the name of a phony climate crisis, then you are not paying attention.

Each of these force vectors is bearing down on the pathway ahead. One thing stands apart, though…

It’s the reason why the real extinction threat is not the one Greta’s scolding her elders about.